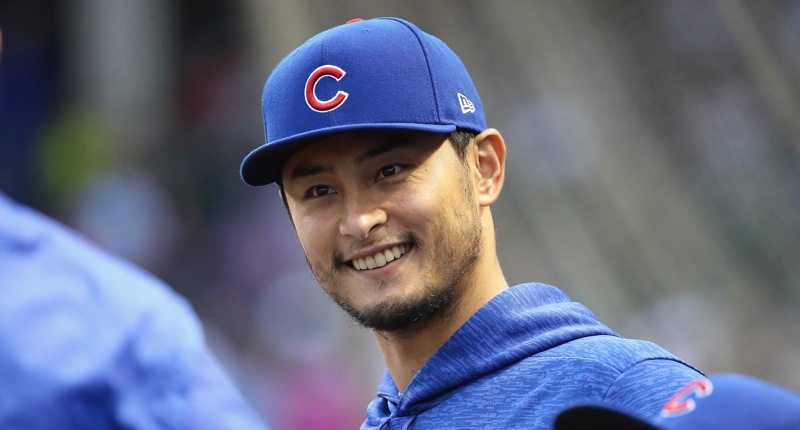 Yu Darvish is looking very good this Spring. We could tell when we saw the radar gun and the clips, but we could also tell by the fact that the Cubs moved his latest Cactus League start to the back fields and a controlled, simulated game. When it comes to vets like Darvish, you very often see that with guys that you know are looking good – no need to make him travel to an away park and the uncertainty of a live game if the point is just to get the arm strength and pitch count up.

Also, there was Theo Epstein declining even to talk about Darvish on the radio because he has looked so good this Spring. Does Epstein strike you as a guy who’d normally be afraid of a jinx? I’m thinking he was having a little fun with a situation that he knows, for now, is going very well.

Oh, and of course, there’s Darvish, himself, who’s already said that his stuff right now is the best in his 32-year-old life.

That’s something lots of guys say – either about their stuff or their bat or their physique – but Darvish’s comes with a little extra oomph given how positive and lighthearted it seems like he’s been in this year’s camp. He’s making jokes, he’s giving interviews in English, and he generally just seems much more comfortable now. If he stays healthy, then I think that comfort is really going to positively impact his performance.

To that end, Darvish is comfortable enough to do some more joking, and he’s looking to make sure the only sound he hears this year is his name, not the boos.

Yu Darvish is ready for Cubs fans to love him, @PWSullivan writes. And he's ready to start the 2nd game of the season, joking he might bean some of his former Rangers teammates.https://t.co/58v9cAkE50

Joe Maddon on Yu Darvish: "He’s been almost a different person this year. Definitely the self-confidence level seems to be soaring a bit right now. I just think the familiarity with the whole group matters to him. Plus he’s healthy."

Yu Darvish is joking about getting booed at Wrigley and hitting Joey Gallo and Rougned Odor in Texas, saying he's never felt better in his entire life.

"He's been almost a different person this year."https://t.co/iBncBk02aQ