Can Infielder Cristhian Adames Win a Bench Job with the Cubs? Skip to content 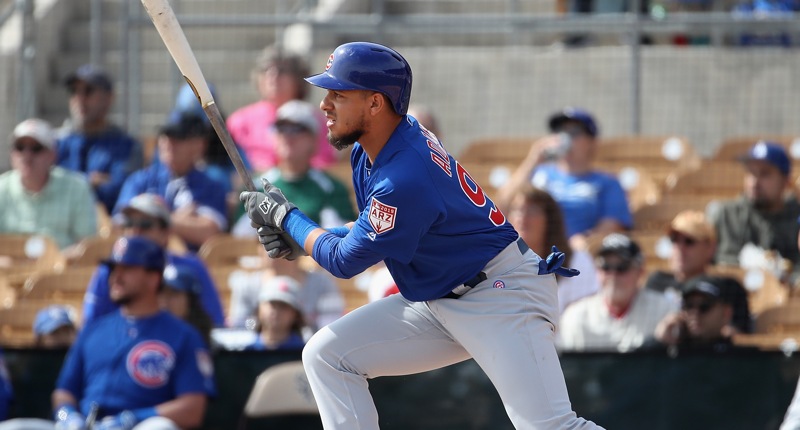 Daniel Descalso is dealing with a shoulder injury, but, given that veteran positional players don’t need a lot of time to be ready for the regular season, and given that he might start hitting again as soon as tomorrow, it’s not a lock that he’ll open the season on the Injured List.

If Descalso is healthy, then the Cubs’ bench picture is pretty clear to open the season:

That’s in a world where you’re calling Albert Almora the “starter” in center and Ben Zobrist the “starter” at second base, but obviously they all kinda move around.

In other words, though, unless Bote is going to be optioned to Iowa to open the year, there is no additional spot on the bench left to be won by guys still in camp like Mark Zagunis and Cristhian Adames. The good news on Zagunis, who could still emerge as a big-league-caliber player if the power keeps coming along, is that he’s got an option year left. So the Cubs can send him to Iowa to open the season and not lose him.

With Adames, who signed a minor league deal with the Cubs in the offseason, that is not the case. If and when he’s ever added to the 40-man roster, he’s gotta also be on the big league 25-man roster. He cannot be optioned to the minor leagues. So, that also means, once he’s added, if you ever want to get him off the 25-man roster and still keep him, you have to get him through waivers.

Maybe that wouldn’t be an issue, given his ugly big league track record, but Adames is 27, and has long been a passable enough bat in the upper minors that he got big league looks with the Rockies in four different seasons as a utility infielder. Clearly they liked him enough to keep giving him chances as a back-end bench guy, even in competitive years.

Moreover, Adames has done enough to impress the Cubs this spring that, if Descalso were to miss time, Adames may be the presumptive favorite to win a bench job out of the gate:

Maddon said he had a very encouraging chat during today's workout with Daniel Descalso (left shoulder). Expected to resume swinging soon — early next week most likely. Also not ruled out for Opening Day, but Cristhian Adames looks like fallback for final bench spot.

Currently, Adames is hitting .444/.475/.833 on the Spring through 40 plate appearances. That’s great! But, you know, that sample size is nothing, and it’s Spring Training. Moreover, I’ll reiterate that, when he’s had a shot in the big leagues, it’s looked ugly (FanGraphs):

Let’s assume full health on the roster for a moment.

If the Cubs feel Bote can capably handle shortstop as the backup there in the first month of the season (before Addison Russell returns), then it’s very hard to argue that Adames should win a bench job and Bote should be sent to Iowa. Bote has shown more with the bat at the big league level, and almost without question has more projectable upside offensively. Adames would have to outpace Bote defensively by a good wide margin to justify carrying.

That said, the Cubs do already have so many options to cover second and third base, Bote’s best positions. And if Adames is as good defensively there as Bote, and also plays a good – not just passable – defensive shortstop, maybe the Cubs want to give Adames an early-season crack to see if something finally clicked for him to break out at the big league level. It’s a luxury they have with Bote’s options.

Then again, it’s not as if the Cubs *have* to place Adames on the Opening Day roster to keep him. Although he may have an opt out in his deal, those usually don’t come until June 1 at the earliest (i.e., I’m in the bigs by then, or I get to opt out of my minor league deal). So, the Cubs could simply send Adames to Iowa to open the season, and then see what happens.

It’s inarguably nice that Adames is showing so much with the bat this spring (so is Bote … ), but it’s not as if baseball history isn’t littered with spring performances like Adames’ that ultimately translated zero to the regular season.