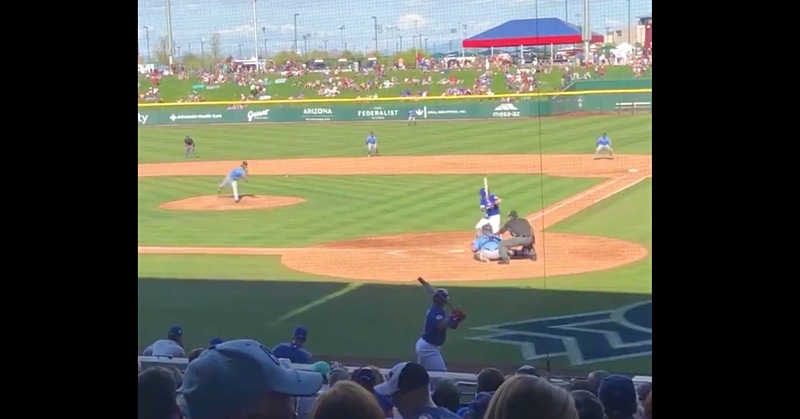 But perhaps the best reason to enjoy a split-squad game is a youngster, who wouldn’t otherwise get a shot even in a Spring Training game, pulling off something incredible.

For example, Cubs 2018 second round draft pick – *out of high school* – Cole Roederer getting into yesterday’s game, and then doing this:

That is just so awesome. Roederer, just 19, was a late-blooming type that the Cubs plucked out of a college commitment with an over slot bonus last year, and the waves of positive reports soon followed. He’s been on our radar as a breakout type already, and this was an especially fun moment to get to see his power in action.

From an earlier bit on Roederer:

Sure enough, via MLB Pipeline: “Roederer earns Andrew Benintendi comparisons for his all-around game, yet lasted 77 picks in the 2018 Draft because he injured his non-throwing shoulder as a high school senior and had a strong commitment to UCLA. With his bat-to-ball skills, quick lefty swing and advanced approach, he could blossom into a .300 hitter with 25 homers on an annual basis.”

You could just already tell that Roederer had become that “helium” guy for the Cubs, a big risky pick and pricey signing, but whose body changed a good bit at just the right time for the Cubs to “win a scouting competition”, so to speak. Were the draft done over, there’s no doubt he would be a first rounder. There’s still a long way to go for him to actually reach top 100 prospect status, of course, but everything has gone right so far, from the results to the development to the eyes-on scouting reports.

He looks pretty darn happy about his moment, too:

#cubs @ColeRoederer with a HR on his 1st swing of his 1st #SpringTraining AB ever. “I’ve dreamt of this since I was 5 years old.” -CR pic.twitter.com/zUlwkA1OIx

Cool moment for Cubs prospect Cole Roederer (No. 5 per @MLBPipeline: https://t.co/dJmelyKh8r). Homers in 8th in his first Cactus League at-bat of the spring. pic.twitter.com/WWdDyFUL2I