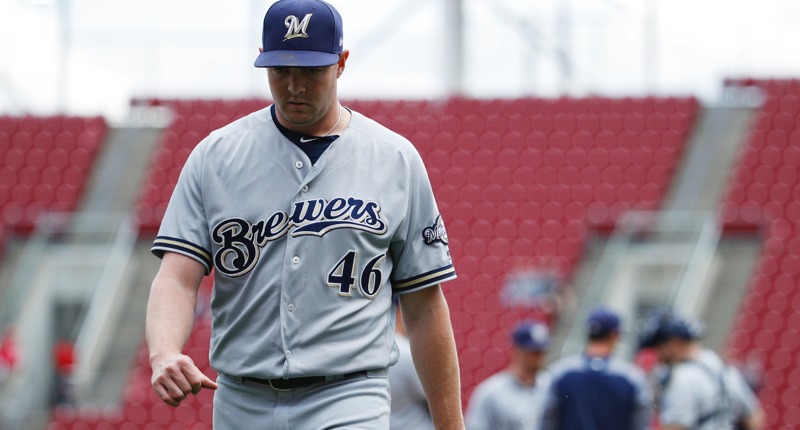 In terms of volume, relievers affect the fewest innings of any position in baseball. However, not all innings are created equally. When the game is on the line, you want quality, dependable arms on which to turn. And when your team derives a disproportionately large amount of value from your bullpen – say, because your starting rotation is among your team’s greatest weaknesses – losing one of those crucial arms for a prolonged stretch of time can be devastating.

The Milwaukee Brewers are one of those teams. In 2018, the 6.6 WAR they got out of their bullpen was fourth most in MLB (second most in the NL) and only barely trailing their entire rotation (8.9 WAR). Unfortunately for them, two of their biggest contributors, Jeremy Jefress (shoulder) and Corey Knebel (elbow), were both on the shelf to start the 2019 season, and now, the news is even worse.

After conferencing with several doctors and team physicians, Knebel has elected to undergo Tommy John surgery early next week and will miss the entire 2019 season. Ouch.

We discussed this possibility in the MLBits earlier today, and I stand by what I said: this is not outcome I – or anybody – was rooting for. Nobody wants to see players injured or their careers derailed. And everyone should want to beat their opponents at full strength. But it’s also impossible for us to ignore the competitive consequences of this news.

The Brewers, who are already without some of their key rotation and bullpen contributors, will now lose an entire season of Knebel.

The good news for him, if there is any, is that the Tommy John surgery success rate has ticked up with every passing year and given how early he’s getting it, he probably will be ready to go come next season. The bad news is that he definitely won’t help the Brewers this year. According to Adam McCalvy, Knebel had the option to avoid surgery and attempt to come back this season without it, but as I speculated, he’s too young and too good to risk it. If he were on the Cubs, this is the path I would’ve hoped he chose.

As for the Brewers, well, they’re left in a tough spot. After winning the division last season, they’re clear contenders in the NL Central, but they’re going at it without Jimmy Nelson in the rotation and without Jeremy Jefress in the short term. Losing Knebel for the entire season, then, was quite a hit.

Rumors have been circulating that the Brewers have been in touch with free agent closer Craig Kimbrel, who’s very (very) good in his own right, though it’s unclear if he’s willing to sign in Milwaukee and what sort of deal he’s looking for, with the season already underway. Some reports have even suggested that he might wait until after the draft, so as to uncouple his free agent deal from draft-related penalties for the signing team, but it’s just as likely he and his agent were waiting for an “opportunity,” for lack of a better word, like this.

And of course, it’s even less certain if the Brewers will be willing or able to fork over the sort of money he’d require – on a short or long-term deal. Their budget is already stretched pretty thin after a bit of a spending spree last season (though they were the benefactors of a few opportunistic deals already this winter). And for whatever it’s worth, the Braves have also been mentioned as potentially involved with Kimbrel at times.

We’ll continue to monitor this situation, as things could move as quickly as the Brewers checkbook allows it. For now, this is a big blow for Milwaukee.