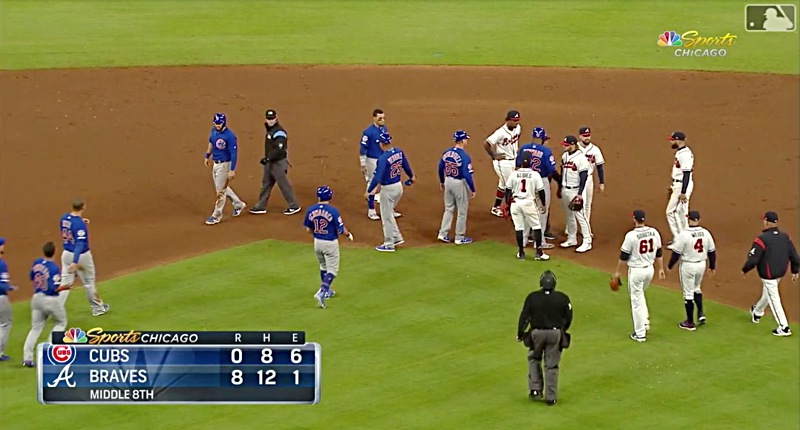 It came after another double play groundout, and it was late in the game long after the Cubs had pooped out, so it was kind of an afterthought, but there was a BENCHES-CLEARING INCIDENT last night.

Of course, it was one of those “oh hey, guys are talking slightly loudly to each other out there, we better leave the benches and go stand around” situations, but still. It was a thing.

As Jason Heyward grounded into his second double play of the night, David Bote slid to second base in such a way as to disrupt Dansby Swanson’s turn. Swanson was displeased:

As we’ve gone over many times, the new rules on slides indicate that not only must you be able to reach the base into which you’re sliding AND stay on the base, but you must also not change your path in order to initiate contact with a defender. In other words … what it looks like – to me – Bote did. This was not an egregiously bad or dangerous slide, and it’s the kind of play every one of these guys came up understanding was just good, hard baseball. But I’m just saying, it’s against the rules if he deviated from his path (and you’re free to hate the rules!).

The double play was completed, so it didn’t become a rules issue for the umpires, but if it had, my eye says Bote had a direct path to the base, but instead veered to the right to try to slide into Swanson, who was at that point pretty well clear of the base. You can’t do that now. You haven’t been allowed to do that for several years now.

Bote, himself, emphasized the playing “clean” and playing “hard” aspect after the game, as you can see in this ESPN clip. I don’t think Bote’s wrong about any of that, but I also think that stuff doesn’t really matter if you’re talking about the rule. The rule is the rule, and you can’t do what Bote appears to have done. So, I guess just heads up for the future.

As for the benches-clearing aspect, it really wasn’t too feisty. Just some conversations, with each side expressing its thoughts on the field, and perhaps discussing dinner plans.