Everything Went Wrong for Yu Darvish in Texas, But Maybe I Can Offer Some Explanations? Skip to content 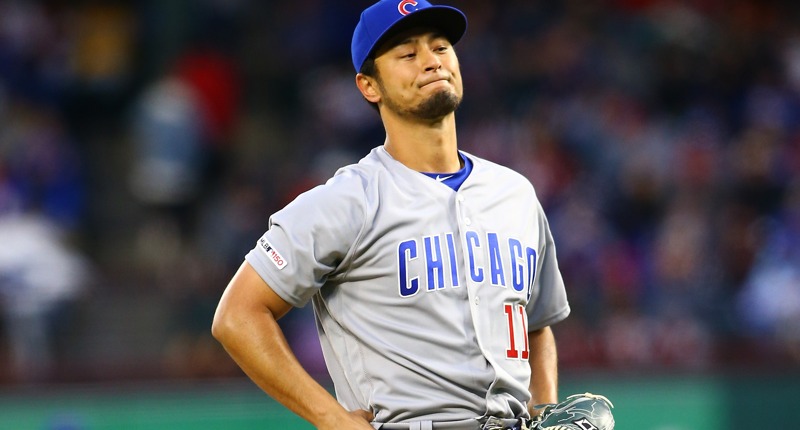 There’s really no sugarcoating it: Yu Darvish’s first start was a disaster. The righty lasted just 2.2 innings against his former Rangers team, allowing three earned runs on a homer and SEVEN walks. He did managed to strikeout 25% of the batters he faced, but with depressed velocity, no command, and terrible results, you’ll forgive me if that doesn’t cheer me up, especially when it was the first time he’d been on a big league mound since early last year.

According to his pitching coach, Tommy Hottovy, Darvish’s undoing was focus-driven (Cubs.com): “I saw just an amped-up version of him. Obviously, he’s a guy who was excited to be back here pitching in Texas and excited to pitch against his old team. I think you kind of saw the joking around in the first inning with Elvis Andrus. And that’s great. He’s obviously comfortable with these guys. But also, there’s a focus factor that we need to make sure that we’re in on.”

That’s a bit of a tough cookie to crack, because (1) it’s pretty difficult for us to draw our own conclusions of his body language without as much visibility, and (2) that just strikes me as something you say after a bad outing. If things had gone well, we might’ve said Look, he was so relaxed and calm before the game, joking around, etc. That was the key to his success.

Of course, we do have to trust Hottovy to an extent, and his opinion on the matter does seems to stretch beyond just the pre-game stuff.

According to Hottovy, Darvish looked slow on the mound in between pitches, but then fast in his delivery – an issue Hottovy and Darvish apparently worked to address during the Spring. Perhaps, lost in the excitement of returning to see his old ballpark, teammates, friends, and family (not to mention starting for the Cubs for the first time since last May), Darvish let some of his otherwise successful Spring routines escape him. That can be lumped under “focus,” without a doubt.

The good news is that he won’t be making his first start – and he won’t be back in Texas – for the rest of the 2019 season. So that eliminates part of the problem, I guess. And as for his tempo on the mound, Hottovy has set up cues for Willson Contreras to remind him. So look for a more rhythmic pace tonight.

Despite pretty acute explanations for the focus-related concerns, we don’t have nearly as much insight on the apparently necessary mechanical adjustments. But according to Darvish, himself, there was, indeed, a noted mechanical flaw in his delivery that they’re hoping to address. From the sound of it, Darvish and Hottovy noticed the flaw together later on (presumably watching game film or something), and they’re hoping the command will be better once addressed.

On the one hand, that gives me hope: mechanical flaws are addressable, especially if they’re accurately identified. But on the other hand, just because you can point out an issue, doesn’t mean you can tackle it – at all, let alone right away. Darvish might know what he’s doing wrong, but not be able to prevent it 100% of the time (like Brett’s ice cream habit) or in changing it, he might throw off something else.

All things equal, you prefer he know the problem than be clueless, but identifying it is just step one. Adjusting is just as hard.

According to Pitch Info, Darvish averaged 92.6 MPH on his fastball in his first start despite being way above that all Spring, and averaging nearly 95 MPH on his fastball last season. And while he does have an unusually wide array of pitches to deploy, Darvish is also a guy who can offer premium velocity (for a starter). Working 2.5 MPH lower than usual/expected is going to make a big difference.

HOWEVER, our friends at Cubs Insider took a closer look into Darvish’s release data from that start and revealed two important pieces of evidence (that nothing was wrong). First, apparently some of Darvish’s cutters were incorrectly identified as four-seamers, dragging down the perceived average velocity of that pitch. That shouldn’t instantly change the narrative, but it could close the margin a bit. And second, Darvish’s horizontal and vertical release points (check out the graphs at CI) were right where you’d want them to be – in fact, they were closer to his pre-2018 levels, when he was ineffective and eventually injured with the Cubs.

When a player’s release points go askew, it *could* indicate fatigue or an injury, thus becoming supporting evidence of legitimately depressed velocity. But because he was right on top of his release points, we can at least assume he felt strong.

The velocity was still down, mind you, but because his command was so off, I’m more convinced than ever that he was just trying to take a little off to put it where he wanted. And with such a small sample on a cold night (and such a high-velocity Spring Training), that all makes sense to me.

This isn’t actually a problem-section, I just wanted to get Star Wars involved somehow. And I did. I’m the master of my own universe.

But here’s the bottom line: Darvish dealt with a blister on his throwing hand just days before his first start with the Cubs since last May, in a city that he used to call home, after having elbow surgery in September, after dealing with an injury that derailed 3/4ths of a season, after signing a massive contract in Chicago.

When you combine each of those idiosyncrasies associated with that one start – and how they can snowball into one another (blister leads to iffy command, which leads to lower velocity, which leads to worse results, which throws him off his rhythm, which causes a mechanical flaw in his delivery … which leads to worse command) – you can actually begin to feel more optimistic about the rest of his season.

We’re further removed from the blister, he got the first start jitters out of the way, he’s not in Texas anymore, he’s been made aware of his rhythm issue, and has made a mechanical tweak to his delivery. If just one or two of those changes take hold, the total package could look a lot better at the end of the day.

Perhaps this is an overly optimistic take, but Darvish is good. He’s a veteran. And he knows what he’s doing. I’m willing to give him the benefit of the doubt, despite how very bad his first start was.