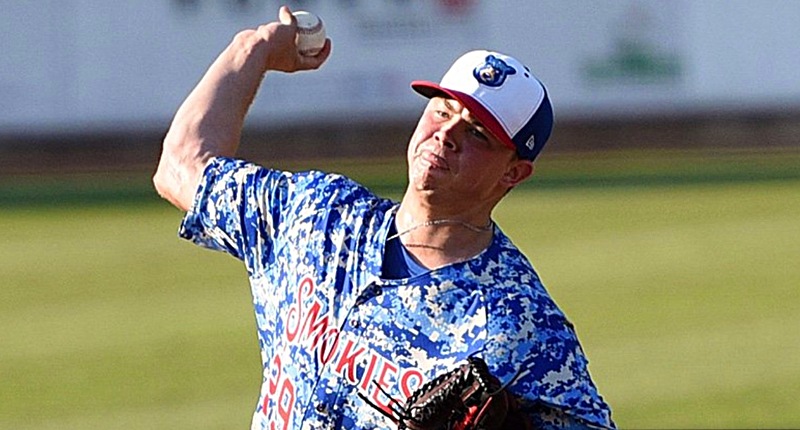 The Tennessee Smokies pulled out a late win last night thanks to an RBI single by Nico Hoerner and an earlier homer by Jared Young, his second on the year.

But the story of the game was number ten Cubs prospect Keegan Thompson turned in an early entrant into the Start of the Year race, in his very first start of the season: 5 IP, 0 H, 0 R, 1 BB, 8 K. Only three Mississippi Braves batters reached base against Thompson, one via a Nico Hoerner error, one via a hit by pitch, and the lone walk. Only two balls were even moderately struck well. He was dominant.

It was mostly a fastball-curveball outing for Thompson, who has a wide array of pitches, but that doesn’t tell the whole story. Thompson’s fastball has many variances, and its late life, led to six groundouts (versus just two fly outs). Last night he showed a fastball that I’d probably label a cutter, in addition to a more traditional sinker and four-seam. The only fastball velocity that was referenced on the broadcast was 91 mph, which is in line with the wide range Thompson pitched at last year (88-93, even topping at 95 in one summer start). He ended the start with an absurd 71.4 groundball rate, according to FanGraphs, more than double his 2018 number.

Early in the season, one thing I’m looking to do is identify what’s different this year among the prospects. Two things jumped out about Thompson for me: Thompson’s clearly worked on getting stronger, and looks to be in better shape this year. Secondly, and most importantly from this start: his curveball last night was the best I’ve ever seen it. This is really encouraging, given that when the Cubs selected Thompson from Auburn in the third round in 2017, it was his curveball that drew the most praise. Last year, the pitch was closer to average, and it was Thompson’s wide pitch mix and control that impressed more than anything.

Thompson started the game with a strikeout of Drew Waters, going a couple times with the curveball. And then he and catcher Ian Rice were fairly stingy with the pitch the rest of the time through the order. It was the second time through the order that Thompson changed his strategy, upping his curveball usage significantly. He ended up whiffing five batters during that second time through, four of them (I believe) with his curveball. Top Braves prospect Cristian Pache went down to end the third inning on three curveballs.

Last season, Thompson led the Cubs system with eleven scoreless starts, and did have last year’s best start with seven perfect innings in his final High-A start on June 14. The Cubs considered moving the 24-year-old to Triple-A to begin this season, pitching him with the Iowa squad at times in camp, but an overall logjam led Thompson back to Double-A. If last night is any indication, it might not be long until he’s pitching in Des Moines.

If Thompson’s curveball has indeed taken this step forward, his prospect status, and odds of reaching Chicago as early as this season, shoot way up.

It is “Doubtful” That Jason Heyward Returns This Season