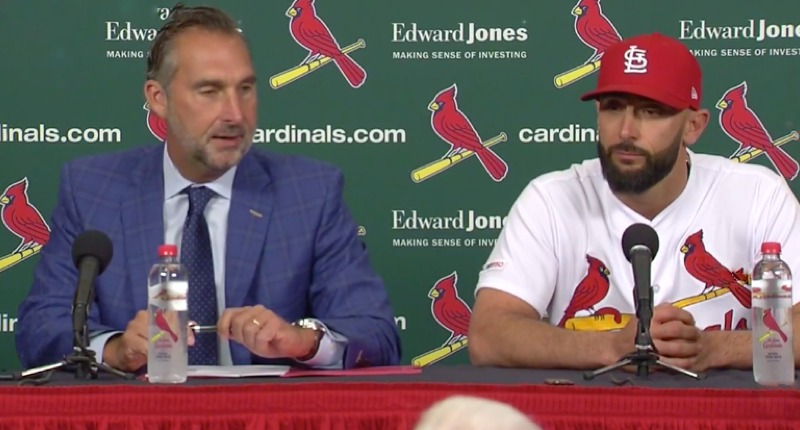 In what has already been one of the most unusual 1.5 months of extensions all around baseball, we have another deal to address. This time, it’s the Cardinals and three-time All-Star Matt Carpenter:

Matt Carpenter is the man of the hour. He receives a two-year contract extension plus vesting option for third year. pic.twitter.com/m466Tc5K7H

Before this deal, Carpenter, 33, had the following terms left on his deal with the devil, excuse me, the Cardinals:

Which means Carpenter could’ve been a free agent at the end of this year. However, the Cardinals have apparently used the momentum of the market to swing some cost certainty for next season as well as at least two more years of potential control. Indeed, according to Derrick Goold, the deal will take Carpenter through the 2021 season, which seems to indicate that it takes effect immediately after this year, replacing the existing option for 2020 and securing his services for 2021. That also means that the vesting option could keep Carpenter in St. Louis through the 2022 season, when he’ll be 36-years-old.

We don’t yet know the financial details of the extension (or the option), but we’ll likely find out soon. I’ll update this post with that news, when it’s out.

As for his performance, Matt Carpenter has been very good since 2012. Here’s a brief thousand-foot overview of his results from that season until today:

Yes he’s getting up there in age and yes he’s had a slow start to this season, but depending on the cost, this seems like a smart move for the Cardinals – especially after they extended Paul Goldschmidt – to keep that window of contention open.

UPDATE: So it looks like the financials are in:

Obviously, that becomes more difficult as you age, but Carpenter has averaged far more than that over the past six years:

In any case, by effectively paying Carpenter exactly $18.5M next season and not guaranteeing him the third year, this is basically like the Cardinals picked up his 2020 option and gave him one additional year at the same rate. If he stays healthy, he’ll get his third year. Of course, if he stays healthy, he’ll also likely stay productive. And if he maintains anything close to the level of production he’s provided over the last several years, the Cardinals will be happy to pay him.