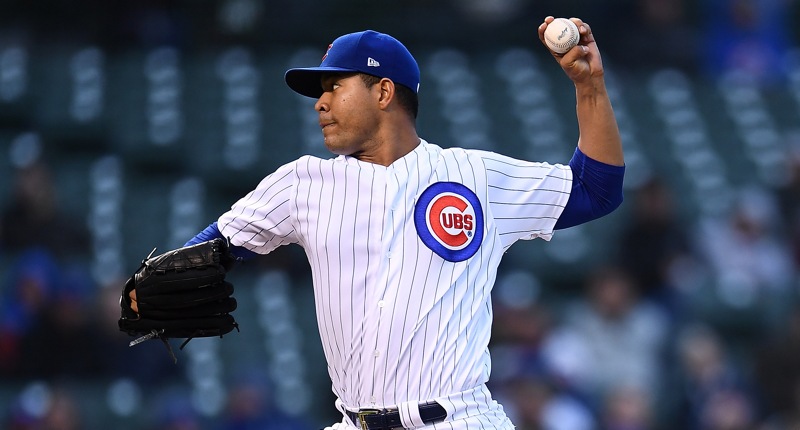 When I started reading Sahadev Sharma’s Athletic writeup of Jose Quintana’s dominant start against the Pirates last night, something stuck out to me like a sore thumb. Something I really couldn’t believe on first sight: “[Last night’s start] was the first time since Sept. 24, 2017 … that a Cubs pitcher went at least seven innings and struck out 10 or more batters.”

That’s just … wow. Not once last season did a Cubs pitcher strikeout 10 or more batters over 7.0 innings. Doesn’t that just sound unbelievable? I guess, when you think back on the season, it’s easy to wonder who could’ve have even done it? But I still find it hard to believe. I guess I just got too accustomed to Cy Young caliber seasons from guys like Kyle Hendricks (2016), Jon Lester (2016), and Jake Arrieta (2015) to remember last year separately and objectively. And as it turns out, you have to go all the way back to September, 2017 (another Quintana start, in fact) to see the sort of dominance out of a Cubs pitcher we saw from him last night.

If you missed it, take a look:

It became clear from the very first inning of the game – when Quintana struck out the side – that he had his best stuff going for him. And by the end of the evening, Quintana’s final line was a thing of beauty: 7.0 IP, 4H, 0ER, 1BB, 11K. And he did it with fewer than 100 pitches! That’s a gem! A Cubs starter threw a gem! Finally!

Naturally, the Cubs were impressed: “Outstanding,” Cubs manager Joe Maddon said after the game. “That’s as good as we’ve seen him. We were talking like maybe that first start against Baltimore and a time or two against Milwaukee. But that was dominant. Strike-throwing, strikeouts, everything was working. Changeup, curveball, fastball, elevated fastball, fastball in. He was outstanding. We needed that.”

To say the Cubs needed to see a start like that from one of the tenants in the rotation is an understatement. For as bad as the bullpen was through the first short stretch of the season, the rotation was struggling, too. In fact, I think the true extent of their struggles was clouded significantly by the bullpen meltdowns and a couple of good, not dominant Jon Lester appearances. It wasn’t a pretty picture overall.

So how did Quintana do it? Well, if you ask Quintana, it was all about his changeup. In fact, he said he doesn’t remember the last time it was working as well as it was last night: “The changeup was great,” Quintana said, per Cubs.com. “It was coming off great with my curveball and fastball, and I used it more than before. It was really good. It’s what I’ve been working [on] in spring training, and I was able to bring it into the season. When you’re able to repeat it, you can face the whole lineup more times.”

And it was working well, too.

According to Brooks Baseball, 6 of those 13 pitches fell in for strikes last night, four of which were of the swinging strike variety. That’s a great balance and, if that pitch is working as well as it was last night, it becomes a method to keep hitters off balance and allow him to go three times through the order more often.

As Joe Maddon explains here, the impact of Quintana’s changeup, when it’s on, doesn’t just apply when he actually throws it, either. Obviously, getting those whiffs and strikes helps directly in the moment, but indirectly, the threat of that pitch keeps hitters off balance: “You can see the hitters’ reaction. They were late, they were uncomfortable. They really didn’t know what to expect.”

Of course, that wasn’t the only pitch working for him last night. In fact, pretty much everything was. Quintana’s curveball recorded six whiffs, itself, and his fastballs (combined) grabbed another five. Altogether, Quintana recorded 15 swings and misses good for a 15.2% swinging strike rate, which absolutely dwarfs the 8.5% whiff rate he’s got for his career.

It’s easy to lose sight of Quintana’s upside given his fine, but underwhelming Cubs career, but there was a time when a top-of-the-rotation classification was not considered a fantasy for Quintana. I don’t know if he’ll build off this start and finally turn into the pitcher we know he can be, but the further development of his changeup would be a legitimate reason to dream on such a breakout.

Let’s not get ahead of ourselves (Michael reminds himself) – that was just one start. But given how rough things have been so far this year, allow yourself a moment to enjoy and dream. Jose Quintana had a huge game, and it was based on things he’s been working on, things he has demonstrated the ability to do in the past, and things he could repeat in the future.