For the Record, I'm Pretty Sure that Ball Did Hit Javy Baez's Foot Skip to content 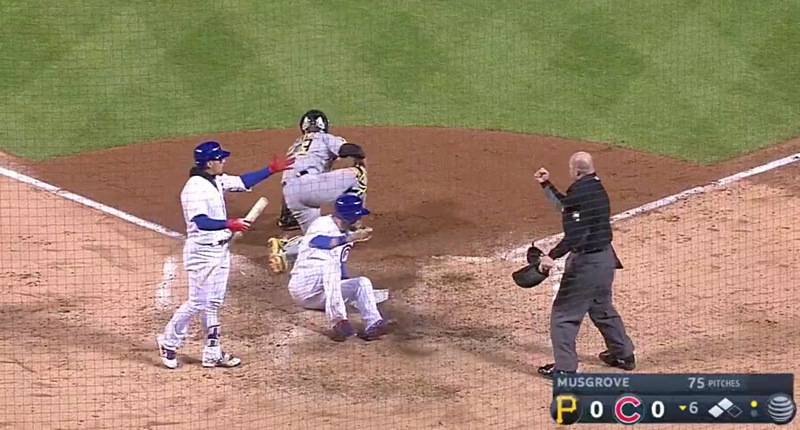 The Pirates netted a bizarre double play at what could have been a very key time last night, with runners on second and third and one out in the 6th, and rain threatening.

Javy Baez appeared to ground to third base, with Ben Zobrist thrown out at home. But Baez was still at the plate, arguing that the batted ball had hit his foot, and thus was foul:

Watching live, I thought it was likely the ball didn’t touch Baez’s foot, but I also though he sure reacted VERY quickly for a guy who was faking it. Yes, Javy is the quickest guy in baseball, so I wouldn’t put it past him to react like that in the blink of an eye to try to help his team – but even then, how could he know in that instant that the throw to the plate wouldn’t sail wide? Or that the defender wouldn’t bobble the ball? In those cases, he could have just COST his team a run by “faking” a foul ball.

No, it was clear to me that, whatever actually happened, Baez truly believed that ball hit his foot.

And you know what? As I watch again and again, the replay that starts at the 35 second mark looks to me like something weird happens with the movement of the ball, and it’s probably because it nicked the top of Baez’s shoe. When considering all of the context, I’m just about 99.9% sure that ball actually did hit Baez’s foot, and it should have been a foul ball.

Even if it were reviewable, there was no way that was going to get overturned in the moment, though, so Baez was kind of in a tough spot – run it out and it’s a bad outcome either way, or try to sell the foul ball that you really do think you just hit. That is to say, if you found yourself grousing about a lack of hustle or any such thing last night, you were wrong.

In the end, I don’t really begrudge the umpire decision on that one, since it was so hard to tell what happened – even if you COULD use replay – and the Cubs are just fortunate it didn’t wind up costing them the game.