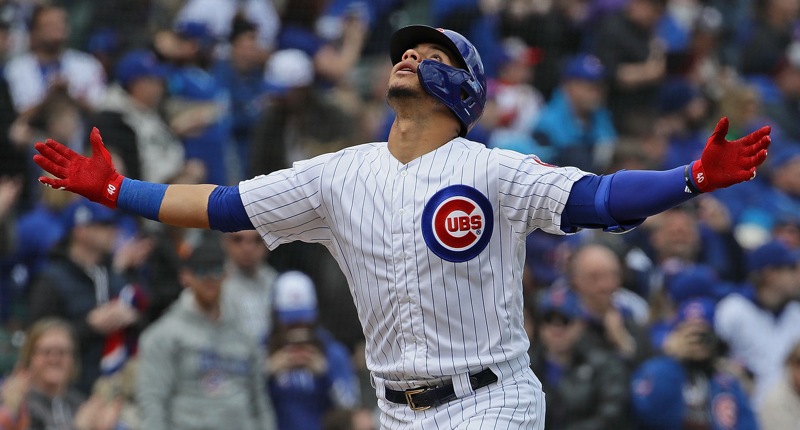 Although losing a young back-up catcher who was at the very outset of perhaps breaking out is not a good thing, we can at least be comforted by the fact that Willson Contreras is as hot now as he’s ever been in his career.

There's nothing but trouble at the corner of Willson and Waveland. #EverybodyIn pic.twitter.com/7hGnz7ZNTx

… but they were far from a wind-aided fluke for Contreras this year. His five homers are the 4th most in the National League, and are already HALF his total from all of last year.

And the homers aren’t the only thing Contreras is doing well. Heck, it’s not even about the absurd results he’s getting right now – it’s about the way his ball-striking is so fundamentally different from last year:

Contreras is hitting the ball so much harder this year, and at a launch angle much more conducive to maximizing damage. More than that, Contreras’s groundball rate – which virtually always been an elevated 54-ish% in his career – is just 43.5% right now. His fly ball rate, which has always been around a mere 30%, is currently a whopping 47.8%.

If any player on the Cubs took to heart the message last year that the Cubs were hitting too many softly on the ground, it was Willson.

His .333/.463/.848 line is just hilariously fun right now, and his 228 wRC+ is 5th highest in baseball. That probably isn’t quite sustainable all year, but very high-level production? Why not?

“A big part of his success is physical mechanics,” Joe Maddon told Cubs.com, “and physically right now, what he’s doing, for me, replicates two years ago more than it does last year. So, I think it’s that, and then confidence is derivative of that, and you’re seeing him play like he did a couple years ago. I don’t anticipate it going away. I really think that, with proper rest, and he’s going to get his days off, and keep reminding him of certain things, he’s going to play like this all year.”

There have been a few mechanical tweaks to his approach and his swing with new hitting coach Anthony Iapoce, which you do like to see in a situation like this if you want to have a little more confidence that the types of batted ball changes we’re seeing are sustainable. Again, maybe not quite to THIS level, but generally more hard contact in the air? Yeah, that could be sustainable if there are underlying reasons for its manifestation and the player has enough talent to support it.

Throw in some natural development as he continues to see more big league pitchers and get more comfortable in his routine and preparation? When you consider how much a catcher has to work on for the other half of his game? Yeah, more and more breaking out was always a realistic hope for Contreras.