It's Not Giant Trombone, It's Trent Giambrone! No, But Seriously, He's Got Power Skip to content 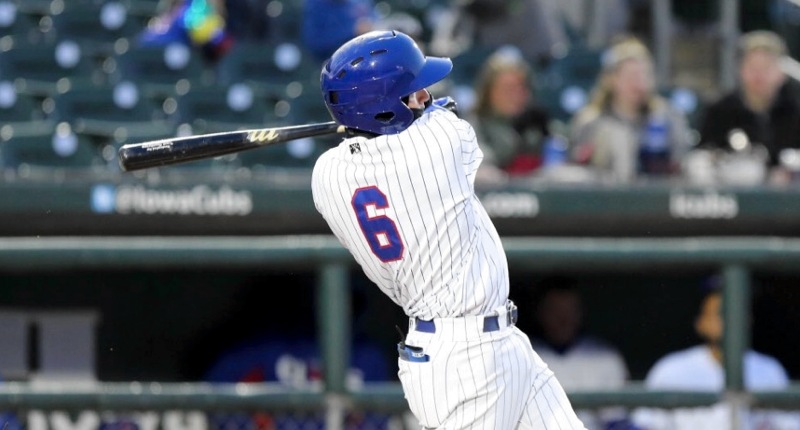 With three home runs in his last four games, Iowa Cubs utilityman Trent Giambrone has become the first player in the minor league system to reach four home runs. Giambrone is off to a good start to prove that the breakout that began in Tennessee last May, which continued in the Arizona Fall League, which stretched into the Cactus League, is no fluke.

Giambrone is one of those great minor league stories of capitalizing on opportunity. His college career began at Jones County Junior College, where, after two years, he transferred to Delta State University. He broke out his senior season, tapping into some power, and the Cubs snagged him in the 25th round. Because, by little more than coincidence, the Cubs had only drafted one college middle infielder ahead of him in 2016 (Zack Short), Giambrone was given a regular-ish job for the short-season Eugene Emeralds in 2016. He impressed that summer, hitting .292/.404/.433, also showing versatility all around the infield.

After a good Spring Training in 2017, Giambrone was sent to High-A Myrtle Beach – skipping South Bend – as the extra bench infielder. A month later, Carlos Sepulveda got hurt, and Giambrone had an everyday job. His season there wasn’t impressive offensively (83 wRC+), but he did have a 5-week, 7-homer stretch in early summer where he was the system’s hottest hitter. It might just have been the thing (paired with another Sepulveda injury and a Bryant Flete trade) that got him a job in Tennessee last year.

And Tennessee was where everything changed, as I wrote about in his write-up as the system’s #21 prospect. I’ll stress again, even if it’s a fairly arbitrary number: no one in the system hit more balls 370+ feet last year than Giambrone. His power comes from really plus bat speed. He loads up pretty well, but his hands are very short to the ball, and he whips that bat with some serious violence.

The good thing is Giambrone seems to be taking his breakout from 2018 and expanding upon it. His power breakout last year came in reducing his groundball percentage by seven percentage points. This year, obviously with a very small amount of data, it’s down another 19.7 percentage points. He has an absurd 36 LD% and, in what is surely the silliest number of the day, is hitting 36.4% of his fly balls out of the ballpark (numbers via FanGraphs).

The exciting thing about his power this year is that it’s coming against southpaws. I know that sounds strange for a right-handed hitter, but Giambrone has been hugely reverse-split in his career. Over the last two years, just six of his 29 home runs came against southpaws, and the OPS split is even more pronounced. He has three home runs already against left-handed pitching, matching his totals from 2017 and 2018.

However, there is still work to be done. Giambrone is yet to walk this season in nine games. This is accompanied by the highest strikeout rate (34.2%) of his career. His batting line of .263/.263/.684 leads to a 121 wRC+, which is not as impressive as it should be. The patient contact hitter from 2016 has been modernized into a swing-and-miss power hitter; he’s going to need to strike some balance somewhere in the middle.

The other question, specifically as it relates to a Major League future, is whether/where Giambrone’s defense can be acceptable. His value will mostly come from versatility, as he’s played six positions professionally, but I’m not sure any jump out as a future home. I will note that Baseball Prospectus’ minor league fielding number was positive each of the last two years, and his error totals at second base are pretty low.

Giambrone would be eligible for the December Rule 5 Draft if he’s not added to the 40-man roster between now and November, but the work he’s doing with the bat makes that addition nearly a foregone conclusion. He’s an example of a player that will be helped by 26-man rosters, and his speedy ascent up the organizational ladder will likely mean he has four option seasons. He is 25 years old now, so his value to the organization as a prospect up-and-down guy will correspond with his peak age seasons. That is, unless Giambrone keeps proving people wrong, and shows he can be something more than that. It might be happening right now.