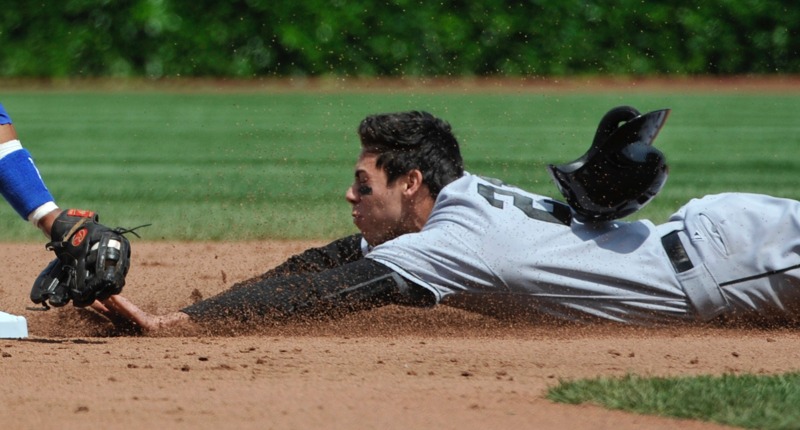 With an average of 6.20 runs scored per game through their first 15 games of the season (3rd best in MLB, 2nd best in the National League), it’s easy to see that the Cubs offense is clicking.

But when you zoom in on the core contributors, you may be surprised to find that Anthony Rizzo (96 wRC+), Kris Bryant (100 wRC+), and Ben Zobrist (103 wRC+) have basically contributed nothing more than league average production. And instead, it’s Willson Contreras (224 wRC+), Jason Heyward (177 wRC+), and Javy Baez (122 wRC+) carrying most of the weight.

Imagine how that would’ve made you feel a year ago today, and be happy about it. This is a deep team.

The secret to hitting THREE homers in one game? Be @ChristianYelich!

He joined #MLBTonight via #BallparkCam to talk about his big night for the @Brewers! pic.twitter.com/VPH3Q1Jq0T

More to the point, imo:

Dude is unbelievably comfortable at that park, which is absolutely perfect for his game. https://t.co/D8XxpTB8xD

Yasiel Puig Went DEEEEEEEP Off Clayton Kershaw in His First At-Bat Back in L.A. https://t.co/R7TP3l7vnA pic.twitter.com/HN6yYwZqpp

Baseball’s Midsummer Classic will be held in Philadelphia for the celebration of the 250th anniversary of American independence and follows suit from 1976, when Veterans Stadium hosted the All-Star Game in the year of the nation’s bicentennial.

The Blue Jays Tried to Take a Three-Pitch Walk with a Runner on First … It Did Not Work Out for Them https://t.co/0fOSfo1hNV pic.twitter.com/XMCndHn0C1