Willson Contreras Went 420 Feet to the Missing Sculpture, Remains on Fire Thanks to Mystery Tweak Skip to content 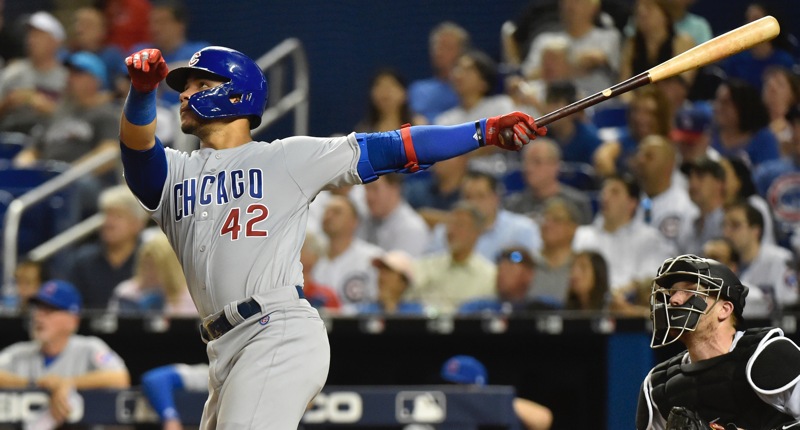 Busy day has pushed this back longer than I’d planned, but I wanted to make sure to give Willson Contreras some love today. Not only because he crushed a monster bomb and is having a great year, but also because he bounced back so thoroughly from an ugly low on Saturday to have a very complete game last night.

After what looked to be a key at bat where the moment got to him and he went outside himself on Saturday in the 9th, Contreras just bounced right back last night like it was nothing. Ripping the ball, staying focused at the plate, working well with his pitchers, and busting it around the bases. It was just a great all-around game for a guy whose talent is really shining through right now.

His 420-foot homer last night was a thing of beauty. He sits back on the breaking pitch, and crushes it to the spot where the home run sculpture used to be (DAMN YOU, JETER!):

That is already Contreras’s 6th homer of the year, 60% of what he did all last season. It is April 16.

His .341/.471/.829 line is good for a 224 wRC+ (lulz), which is the 4th highest mark in baseball, trailing only Mike Trout, Cody Bellinger, and Anthony Rendon. (Bonus: the four guys behind Contreras right now are like a who’s who of “wait, what?” – Tim Anderson, Jorge Polanco, Austin Meadows, and Peter Alonso. Just like everyone would have predicted, and just like the final list will be at the end of the year!)

Bonus Contreras fun, and some MYSTERY from Joe Maddon:

Maddon mentioned in spring he saw something in W. Contreras that could "carry over" to the reg season. Something mechanical he won't reveal (not just an early load). Says it has carried over and we are seeing the results.

Maddon even went to the “just one thing” language in the Cubs.com piece on Contreras (this ONE WEIRD TRICK will make you ball out at the plate!). I’m #NotAScout, but even I can see some really pronounced differences this year versus late last year:

Joe Maddon said there was "just one thing" Willson Contreras was doing differently mechanically this yr, but wouldn't specify what. Things you can easily tell: (1) how much earlier Contreras is ready, & (2) how much more crouched he is. See pics from late last yr vs last night. pic.twitter.com/tFYgsgpa4X

Hopefully that’s what has been working for him, and is something he can keep up. Maybe not quite to THIS level, of course, but much more power in the air than last year.