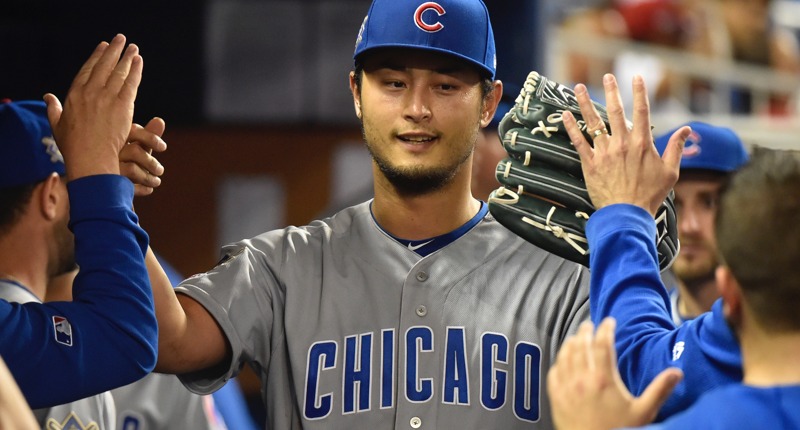 Those are Yu Darvish’s game scores, in order, from every start this season. Last night’s rating in Miami (54) marked continued improvement on this season, as well as just his fourth time over 50 as a member of the Chicago Cubs. I call that progress.

But those game scores and those top line stats aren’t the only obvious marks of progress for the Cubs fireballing starter. Darvish netted 13 whiffs on the evening (4 on his fastball, 4 on his slider, 4 on his cutter, and 1 from his curveball) tying his season best, set his last time out:

Basically he was missing plenty of bats and using several different pitches to make it happen. And when Darvish is at his best, that’s how it’ll look – multiple pitches in his very large arsenal contributing to the effort.

But it wasn’t only whiffs. Darvish’s two-seamer – not something he’s thrown much in the recent past – didn’t get a single swinging strike last night, but 12 of the 19 he threw to Willson Contreras fell in as strikes, nonetheless. And his only changeup of the evening did, as well. It might seem odd to discuss how many strikes he threw on a night when he walked four batters in 5.2 IP, but that’s just the game he had. And if he had more games like that going forward, I think we’d have something to celebrate.

As for the walks, well, Darvish had some jokes:

After no walks Wednesday, Darvish walked four and hit a guy. Why? What was the difference?
“Just I’m Yu Darvish. I walked guy[s].”#SelfAwareness

I mean, sure, his command hasn’t been great this year, but his stuff has looked absolutely electric. If you weren’t watching the game last night, you may have missed it, but Darvish was showing an extremely nasty slider, and lighting up the radar gun in his final inning of work, hitting 98 and 99 mph.

I doubt we’ll see Darvish working routinely in the upper-90s this season, that feels more like a “I know this is my last inning, so I’m selling out” kind of move, but maybe we will see a few more 96s and 97s on the radar gun as the year goes on. When you can pump fastballs at that level with consistency *as a starter*, and you can pair it with his other pitches, your command doesn’t need to be nearly as fine.

Think of it like Javy Baez’s swing. After last season, do any of us still really want to try to change him into a different hitter?

I think, by now, we’ve learned that when you’ve got the talent, you’ve just got to let it play. And, at the most fundamental level, that’s what Baez’s swing or Darvish’s fastball can be: pure, unfiltered talent – matched by very few in the world. If Darvish can find more success at a higher velocity, with slightly worse command, so be it. It’s a little odd to hear, but hey, maybe it’ll work just fine.

Darvish’s catcher, Willson Contreras, seemed to find that point in his postgame comments, as well: “I know he can throw that hard, but at the end of the game I didn’t expect that,” Contreras said. “He’s got to be aggressive to everyone …. Those (walks) will happen. (But) I’ll take (the results).”

I don’t want to go too far down another rabbit hole right now, because I think the story of last night and Darvish’s next start is going to be that improved velocity and what he can do with it going forward, but I will point out that Darvish also induced a ton of ground balls last night, too. His 61.5% ground ball rate was his best as a Cub, and part of the broader trend of improvement we’ve seen from his first start in Texas until today.

If the new Yu Darvish is up there pumping mid-to-upper 90s fastballs – including with a two-seamer – and getting more ground balls than he ever has in his career, he’s going to be a near-top of the rotation starter. That’s just the level of stuff he has. And that’s why the Cubs paaaaid him in the first place.

So, sure, this was just one start – and it was against a weak Marlins lineup – but I was encouraged by what I saw from hi, independent of how the Marlins handled it. I can’t wait to see what he brings to his next start.

Here’s more from Darvish, himself, after the game: