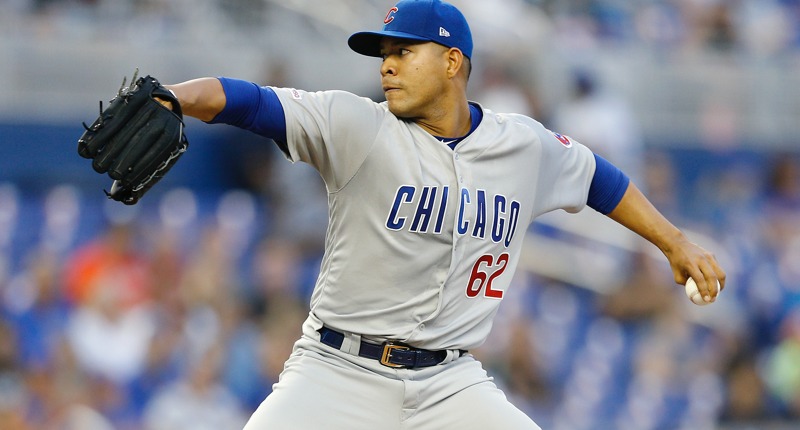 Game Score isn’t a particularly useful stat when you’re trying to look ahead – aside from its limited predictive capabilities, there are different versions/calculations, and not enough people use it, so it’s rarely a part of common sports conversations or analysis such that it’s even meaningful enough when you drop a Game Score note.

However, Game Score can be a nice, quick look at any given start to see how well, in general, a pitcher did with a little more detail than the binary “yes-quality start, no-quality start” nomenclature of the past. You’ll see what I mean.

In 2018, Jose Quintana’s best start by Game Score was 81. That was at Wrigley Field on April 28th against the Brewers. He lasted 7.0 scoreless innings in that effort with 7Ks and 1BB. His second best start of the 2018 season was another 7.0 scoreless inning affair in Cincinnati. He also struck out 7 batters in that one, but allowed four free passes, so his game score was a little worse: 77.

In any case, those are both obviously good starts – indeed, they were Quintana’s best all last year – and yet he’s already matched those in quality through three starts this season.

Quintana’s second start of the year against the Pirates (83 GS) was – at the broadest level of analysis worth considering – better than any single start he made in 2018. And his start last night against the Marlins (77 GS) was nearly the same.

In case you weren’t able to catch it, here’s a recap:

Against the Marlins in their home park, Quintana went another seven scoreless innings last night (bringing his consecutive scoreless inning streak up to 14.0 IP), allowing just 6 hits and NO WALKS against seven strikeouts.

On the other side of the ledger, Quintana did allow a 40% hard-hit rate, but 50% of the balls in play were hit on the ground – which is excellent – and he actually also carried an insanely high 35% soft-hit rate (league average is closer to 18-19%).

So be it his command (no walks), strikeouts (7), results (no earned runs) or batted ball data (lots of ground balls, tons of weak contact), Quintana had it working last night. And as you can imagine, that makes his season numbers look pretty good: 3.43 ERA, 3.24 FIP (0.5 fWAR).

And if you really wanna have something cool to tell your White Sox friends, you can point out that his 12.43 K/9 ranks 5th best in baseball, behind only Jacob deGrom (2018 NL Cy Young), Matthew Boyd, Gerrit Cole, and Blake Snell (2018 AL Cy Young).

So what was working for him underneath the hood? Well, like his last impressive start (13.1%), Quintana used his changeup a lot more last night (12.1%) than he did in 2018 (6.9%). He got fewer whiffs this time around (still a 20% whiff rate though, which, as Brett has put it to me: “Is sexy as hell”), but had a higher strike percentage overall. Of course, as both Joe Maddon and Quintana pointed out last time, the positive effects of that pitch aren’t exclusively direct. When that changeup is on and he’s using as often as he has it’s a constant threat. And when that threat looms as a possibility on any given pitch, batters are going to be off-balance more often.

All of which is why I wasn’t particularly surprised to see his fastball fall in for a strike 81.3% of the time(!) including 7 whiffs last night alone. Pitches play off one another, and that’s how a good changeup can improve a fastball (or vice versa).

And while those two pitches were vibing well together, his other offerings profited, as well:

The thing about Quintana successfully elevating his fastball is that it makes his big breaking curveball that much more devastating as it comes in on the same plane (i.e., it tunnels even better and you don't know what pitch you're looking at until it's too late).

That combination is a thing of beauty, and so was his start as a whole: “Q was on top of his game again,” Joe Maddon told Cubs.com. “He had great command of everything, great carry on his pitches. The curveball was as good as we’ve seen it. And now the changeup is becoming a force. He’s pitching with everything he’s got, with a lot of confidence, and there’s no reason why he cannot continue that.”

You’ll have to forgive me, but I’m just so enthusiastic about these last two starts. Getting great results is all well and good, but when you’re doing it in fundamentally sustainable ways that’s much better. And when those solid underlying statics are tied to real changes (say, something like pitch mix), it’s like the trifecta of positive signs.

I don’t think Quintana will keep this scoreless streak up forever, but I do think he’s laid the foundation for an entirely more effective approach on the mound.