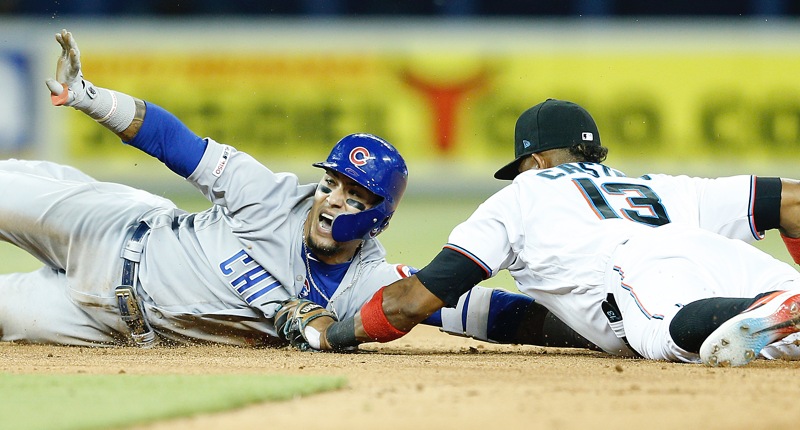 Javy Baez, as you well know by now, just makes stuff happen. Whether it’s a sparkling play on defense or a monster homer or a well-time steal of home, Baez is called “El Mago” because he just does stuff.

And in his “doing stuff,” what’s most remarkable is that he pretty much never makes a mistake. Even as you’re watching him make a decision out there that has you wondering if, this time, he finally went too far … he almost never actually does go too far!

As Joe Maddon put it:

Joe Maddon said the key with managing Javier Baez is trying not to inhibit his talents: "You stay out of his way and give him permission to make mistakes."

Exactly right. Permission to make mistakes. Sometimes he will. Mostly he won’t. And because he has that permission, a lot of the stuff he does successfully will be stuff no one else would ever have the cojones to try.

Like stretching a standard bloop single to center into a double, which Baez absolutely successfully did last night, but for a bogus replay review:

Marlins challenge call that Javier Báez is safe at 2B in the 6th; call overturned, runner is out. Powered by @mitel. pic.twitter.com/PPOsBMeiyr

I feel like I have to bang this drum two or three times every season, and that’s partly because we as outsiders don’t necessarily have every camera angle the replay official has in New York. But *IF* he had only the same angles we had – and there were SEVERAL of them – you absolutely cannot justify overturning that call on the field.

The rule requires “clear and convincing” evidence that the call on the field was wrong to overturn. In other words, unless you can CLEARLY *AND* CONVINCINGLY tell that the call was wrong, the call is supposed to stand. Simply because you think the call was PROBABLY wrong is NOT ENOUGH.

In this case, do I think Baez’s hand probably came off the bag for some period of time while Castro’s glove was still on Baez’s jersey? I can combine all the views and say, yes, it probably did. Do I think Baez was probably out? Yup, I do. But can I see it CLEARLY and CONVINCINGLY? No! The only things you can see clearly are that Castro applied the glove when Baez’s hand was on the bag, Baez had came off the bag at some point, and Castro’s glove came off of Baez at some point. You can only tell clearly that those three things happened, but the precise order in which they happened is definitionally not clear!

Thankfully, it didn’t wind up mattering in the final accounting of the game, but I’m nevertheless annoyed that Baez wasn’t justifiably rewarded for his madness out there on the bases. He busted it out of the gate on that hit, knowing the center fielder was playing back, and knowing that the pressure he applies by doing something surprising can create chaos – like the bad throw from center.

You just keep being you, Javy.