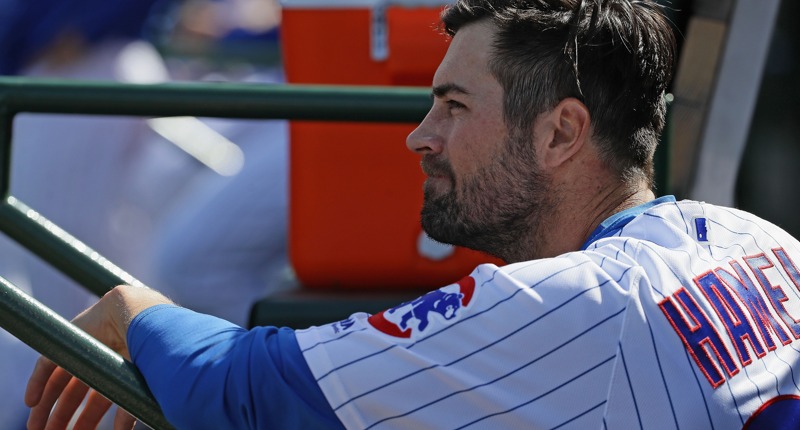 Cole – excellent birth name, Colbert – Hamels was a big source of concern for me heading into the 2019 season. Not necessarily because I didn’t think he’d be good, but because the Cubs had taken a pretty big gamble ($20M) betting that he’d be close to the the guy he was for them in the second half of last season (2.36 ERA, 3.42 FIP in 12 starts) and not the guy he was before that in Texas (4.72 ERA, 5.20 FIP in 20 starts). And it wasn’t just the money they spent on him, it was the opportunity cost of not spending that money elsewhere.

Fortunately, Hamels has done pretty much nothing but good since the regular season began, including last night’s seven scoreless, walk-less innings of baseball in Miami.

Alongside the notable absence of walks and runs last night, Hamels allowed just three hits and notched eight total strikeouts (including 14 whiffs). On top of that, Hamels solicited an absurd amount of ground balls (81.3%) and every batted ball classified as a fly ball was popped up on the infield (which is ideal). That’s how you dominate a start. And that’s what Hamels did last night.

Indeed, that was his best performance of the year so far, and he’s had a pretty good year:

Aside from the combined 3 earned runs over his last 21.0 IP, the total lack of walks through three straight starts is making me drool. As Jesse Rogers points out, Hamels hasn’t walked a batter over his last 22.0 innings pitched, which is currently the longest stretch in baseball this season … by six full innings!

Indeed, Hamels’ 3.0% walk rate this season is actually the second lowest mark in all of baseball, behind only Padres starter Nick Margevicius (2.5%).

Plus, although I’m not full-on campaigning to justify his first start in Texas this year, I will point out that the sixth pitch of the at-bat just before Delino DeShields hit the critical grand slam was a borderline call that could’ve ended the inning instead of loading the bases. You still have to get that next batter, bases loaded or not, but he was a call away from having an absurd four-start beginning of the 2019 season. Again, it doesn’t work that way, but given how well he’s pitched since and how tight that zone was, it’s not difficult to just broadly say he’s been pretty close to fantastic the entire season.

Indeed, despite that grand slam, Hamels is tied with guys like Noah Syndergaard,  Gerrit Cole, Blake Snell, James Paxton, and Trevor Bauer for the 11th most WAR among starters (0.7). Meanwhile, his 2.77 ERA (23rd) and 3.18 FIP (26th) both rank among the top-30 in all of baseball.

As you can imagine, Hamels has been happy with results (MLB.com): “The past couple of games, just really trying to stay focused on throwing strikes and executing. That’s obviously the key to going deep in a ballgame and keep guys off the basepaths: throwing strikes and trying to get outs early. I think ever since that game, it’s just always been on my mind this whole season, even in Spring Training. It’s maintaining that desire to execute strikes and obviously not give away free passes.”

Now, with all of this said, we do have to concede that aside from Milwaukee, Hamels has faced some pretty bad teams this season. The Marlins, Rangers, and (Trout-less, Ohtani-less, Upton-less) Angels lineups are not world-beaters.

In fact, the Marlins (66 wRC+, 27th), Angels (53 wRC+, 29th), and Rangers (87 wRC+, 17th) are some of the worst teams in baseball against left-handed pitchers, in general. So he was set up for success. But to play devil’s advocate, the Brewers are one of the hottest lineups in baseball, especially against left-handers (137 wRC+, 6th in MLB) and it’s not like those aren’t all big league teams. A good pitcher dominates more times than not when he’s set up for success, and Hamels has dominated. You can be aware of those teams’ offensive shortcomings and still be impressed that Hamels did what he did.

We have a long season ahead of us and plenty of time to decide – in retrospect – whether Hamels was worth the $20M investment and related roster impact, but so far he’s done nothing but prove the front office right. And given the way Yu Darvish and Jose Quintana have performed this week just ahead of him – plus Jon Lester’s impending return – the rotation is really starting to shape up.