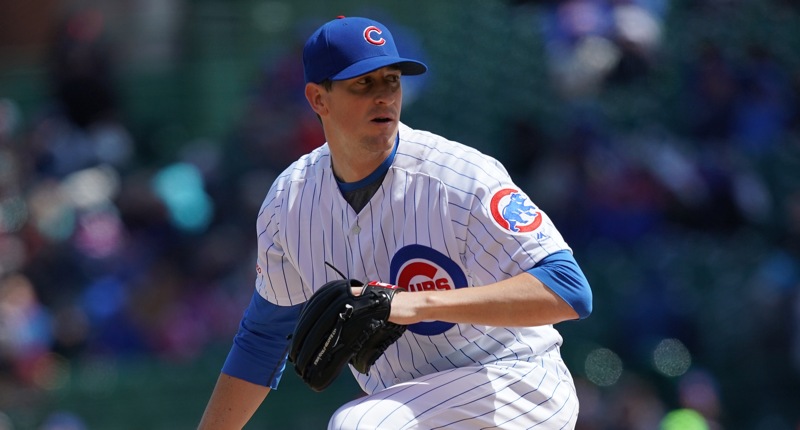 As Joe Maddon very correctly put it, yesterday was a “classic Kyle” performance.

Kyle Hendricks, after a few rough starts to open the season, apparently had a whole lot click at the same time for him yesterday, as his fastball movement and location was spot on, and his changeup usage was absolutely masterful. Hendricks not only pitched 7.0 scoreless innings (during which he was basically never seriously threatened), he struck out a whopping 11 batters, as he had them flailing and staring all day long. It was such a thing of beauty.

Imagine if he could throw that consistently a few times a game. Unless you’re sitting on it, I’m really not sure how you do anything but crumble like that hapless batter.

Fastball command has been the main issue for Hendricks in the early going this year (as many seasons for him, in fact), but yesterday, it was just so dang tight:

Hendricks said a main key for him vs. D-backs was fastball command. You can see here that he was more precise with his sinker today (first image) than in his previous three starts (second image). Got 20 called strikes out of 56 fastballs. Had 27 in 112 in '19 heading into today. pic.twitter.com/VN7r9eCw1G

Here’s what his pitching coach, Tommy Hottovy, said after the game about how things fell in line (Cubs.com): “All the things we’ve been working on finally clicked. A lot of times with Kyle, he’s always right there. He’s always really close. And all it takes is one or two pitches to click and for him find that mechanic, that arm slot, and everything kind of falls into place and he gets rolling.”

That’s the thing about Hendricks: few pitchers in baseball have to be so fine with their mechanics to have success, and yet when Hendricks is right where he needs to be, he can dominate. Such a narrow band for him to hit, but when he hits it, he does what he did yesterday. When he doesn’t, he can really get smacked around. Fortunately, he is far more frequently where he needs to be than not.

I would be remiss if I didn’t mention the one really crazy thing from yesterday’s game: the wild pitch.

Merrill Kelly threw a wild pitch that inning. Perfect time to mention that Kyle Hendricks through the first inning today has a current streak of 6,644 pitches without a wild pitch (including postseason) #Cubs

It was a streak that literally went all the way back to 2016. Absolutely unbelievable: