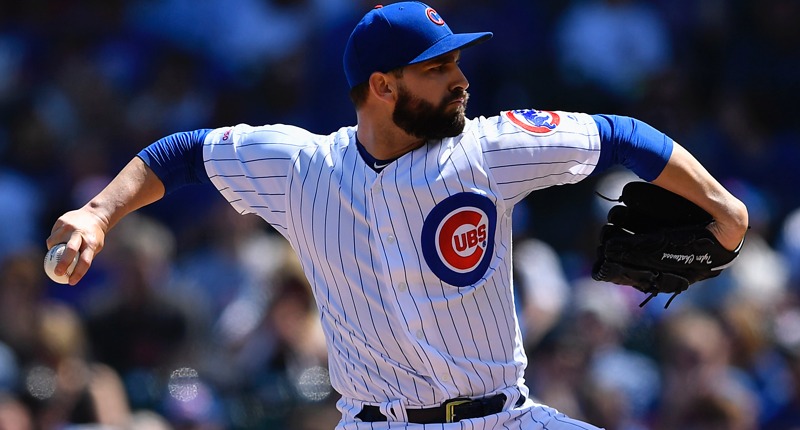 Tyler Chatwood made 20 starts for the Chicago Cubs last season, and the best one – by far – was his April 29th game against Milwaukee (74 Game Score): 7.0 IP, 2H, 0ER, 3BB, 4Ks. I’ll confess, I don’t even remember that outing – not only because it was so long ago, but because of everything else that followed that start.

Indeed, that was Chatwood’s only scoreless start of the season and, really, his only good start with the Cubs all year (by Game Score, his next best start was a 5-walk appearance against the Indians, so … yeah: that Milwaukee game stands out as am exceptionally good one).

But last night, Tyler Chatwood came close to tying his best overall performance with the Cubs, with six scoreless innings against the Diamondbacks. And although he came up just short in overall game score (70 vs. 74), he allowed just two hits and two walks(!) throughout, and did it all with just 71 pitches! Which sorta brings us to the other impressive feat of the day: this was just a spot start, as he’d since transitioned into the bullpen. And just because he stretched out as a starter in Spring Training, doesn’t mean the switch didn’t affect him: “As a competitor, you always want to stay out there,” Chatwood said via the Daily Herald. “I’m not going to lie, I was pretty gassed. I don’t think I’ve thrown that many pitches for a while. But it was nice to get through 6.”

It was nice to get through six, my friend. You didn’t just get through. You killed it:

With Jon Lester and Mike Montgomery both on the Injured List, Tyler Chatwood was tapped to fill out the rotation at a critical time of year (especially given the slow start) for the Cubs. But his first opportunity to step in was taken last weekend, when April snow showers banged the Cubs/Angels finale at Wrigley Field.

Although I can’t say I expected Chatwood to be nearly as good as he was yesterday against the Angels last weekend, I was a little disappointed to see his previous start skipped. Despite the obvious and debilitating command issues he’s dealt with throughout his Cubs career, his stuff is still as electric as almost any starter in baseball. So when he’s on, he’s on. And yesterday, Chatwood was on.

Through his six innings pitched, Chatwood average 95+ MPH on his four-seamer and sinker. And while he got only 8 whiffs on the day (which actually isn’t bad, considering how few pitches he threw overall!) it wasn’t the swing and miss stuff that was most impressive. It was all the weak contact.

In terms of contact management, Tyler Chatwood's performance today was absolutely fantastic. Not only did he get 9 groundouts against just 2 fly outs, the Diamondbacks weren't doing diddly poop for hard contact. pic.twitter.com/WbpGFbJ6GY

All together, Chatwood got an absolutely beautiful 60% ground ball rate and 26.7% fly ball rate, with a TON of soft contact (26.7%) and very little hard contact (26.7%). And because he walked only two batters, he dominated quickly and effectively (Daily Herald): “I think everybody saw kind of what I went through last year, how hard I was trying to get back to being me. Obviously, you can see the difference of what I did in the off-season, how hard I worked in the off-season. I think everybody’s happy to see that come into fruition. So it was good.”

Without surprise, Joe Maddon was exuberant after the game, ignoring the Javy Baez double and David Bote walk-off as side-events to the story: “It’s the whole game … It’s all about Chatwood today. That was spectacular – the command, the stuff, the ease with which he was throwing it. That was pretty outstanding … We’ve talked about it a lot. As he gains feel for what he’s doing, he’s capable of that.”

So what happens now? Well, in all likelihood, that’ll be Chatwood’s only start for a while. Jon Lester is on his way back – as is Mike Montgomery – and whenever Lester is ready, he’s going to be right back in the rotation. HOWEVA, that comes with a few very important caveats. For one, there’s no guarantee that either Lester (or Montgomery, if the Cubs preferred him as a spot starter) will be ready by this Thursday, when the next opening in the rotation arises, which means Chatwood could be called on again. Finding that out sooner rather than later would probably help with his preparation (and, thus, overall success), so I’m guessing he’ll prepare like he’s taking the start no matter what – just in case.

Note: The Cubs are holding out a little more hope for Lester (or even Montgomery) than usual, because the Dodgers offense has been the best in baseball against right-handers this season.

But that does bring me to my second caveat: Chatwood is right-handed. While Mike Montgomery may be considered first for any additional spot starts in the future, Chatwood’s excellent performance may have thrust him deeper into those conversations. Specifically, before yesterday’s start, I’d imagine Montgomery would get the first chance to fill in, no matter the team. But now, if a spot start is coming against a squad with some weakness against right-handers, don’t you have to more seriously consider Chatwood? I think so. I think he’s earned at least that much.

So while I am still hoping for quick recoveries from Lester and Montgomery, I can admit that I feel slightly better about Chatwood’s presence on the roster. His usefulness has already ticked up and he could now be considered more than just an emergency contributor. Maybe that seems like a low bar, but, well … you saw how 2018 went. Let’s just be happy we’re here.

The Cubs have options for what they want to do this week, and need not necessarily feel rushed to get Lester (or Montgomery) right back out there.

[Brett: If I say something about a six-man rotation, will people think I’m just being a recency-bias idiot? Probably. But I’ve been banging that drum for two years now!]
Filed to: Chicago Cubs
Latest from Bleacher Nation: