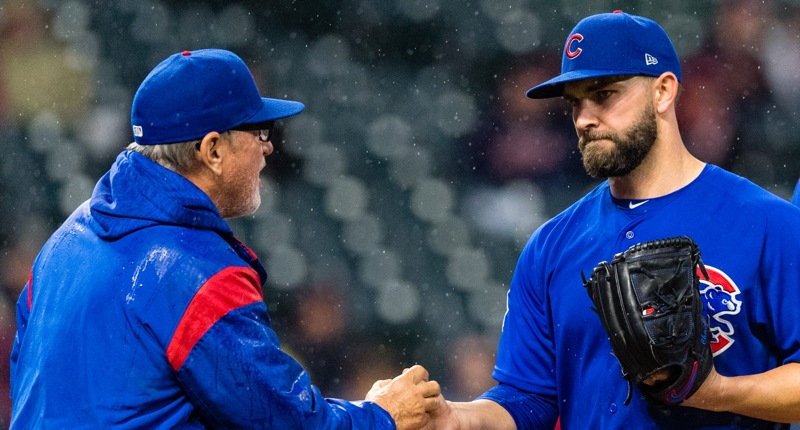 With Jon Lester on the doorstep of a return from his hamstring injury, with the rest of the rotation healthy, and with Tyler Chatwood coming off one of his best starts as a Chicago Cub, it was only fair to wonder if the Cubs might consider going with an expanded (aka, six-man) rotation, even if only for a little bit of time here in the early going. It can help lengthen starter appearances, protect arms for the stretch run, and optimize performance on a start-to-start basis. That’s the theory anyway.

And, although the Cubs have occasionally inserted a sixth starter for a turn or three, it doesn’t sound like it’s coming for the Cubs any time soon.

Appearing on 670 The Score today with Laurence Holmes, Joe Maddon heaped praise on Chatwood for a start Sunday that Maddon saw as, “[not] a fluke. That’s pretty much what we had expected, something along those lines. I think it’s a great step for him. It’s repeatable.”

But he stopped short of suggesting that Chatwood is now in the rotation, together with a Lester return:

In other words, depending on the Cubs’ expectations for Lester on Thursday, we could see Chatwood pitching right back out of the bullpen as soon as Wednesday. Ideally, Lester would be good to go on Thursday against a Dodgers club that destroys righties, in particular, but if he’s not available, the Cubs could go with Kyle Hendricks, who would be pitching in the normal order, and would also have already had an extra day of rest thanks to yesterday’s off-day.

I tend to think that, if we see Chatwood make an appearance on Wednesday, that means Lester is going to be back, either Thursday or at least this next turn through the rotation.

This is all happening, by the way, as Mike Montgomery stretches out in the minor leagues, and could himself soon be ready to take a start if the Cubs needed. SEVEN-MAN ROTATION!