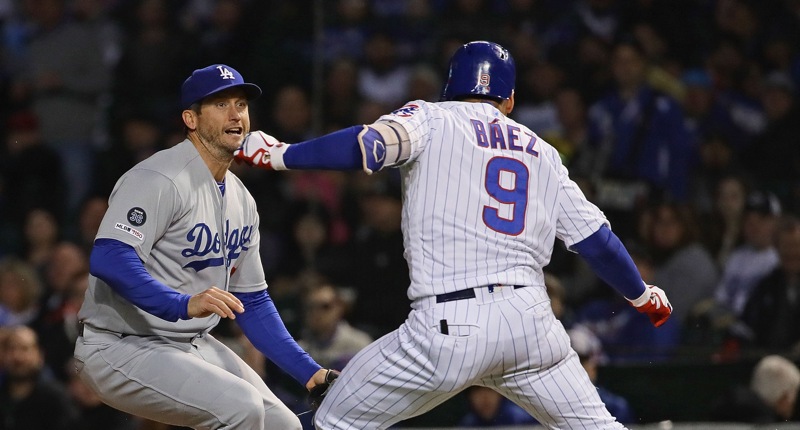 Sometimes, we just need to marvel in the incredible overall personage of Javy Baez. We call him “El Mago” because, hey, nicknames are fun. But more than that, it’s just such an accurate reflection of how magical he seems to be on the baseball field. He does everything well, which is impressive enough at the highest level of a professional sport, but then he adds to it by so frequently doing things that you didn’t otherwise see coming, think were possible, or think you’d ever see.

Last night was a perfect example of what Javy Baez can do, in every phase of the game. As Willson Contreras put it, we call him El Mago for a reason:

"He's El Mago for a reason. For me, he's the best out there." -Willson Contreras@Kelly_Crull caught up with the Cubs catcher after a huge win (@JandSJewelers) pic.twitter.com/wOeiYI3tTs

There was Baez somehow scoring from first base on a Contreras double to left that didn’t even reach the wall:

There was Baez flashing quietly excellent defense throughout the game, making DEEP throws from shortstop on the outfield grass, and quietly making plays like this, that I’m not sure anyone else currently on the roster would make:

There was his (ANOTHER) opposite-field homer:

What I love about Baez’s continued dominance the other way is that because he is among the unique ballplayers who can generate that much power the other way, he has the BENEFIT of being able to sit back just a little more on pitches. He doesn’t have to cheat to pull everything in order to get power, so that means even when he sits back on a pitch that’s right down the pipe … he can still drive it out of the park.

And then, of course, there was The Juke, which is El Mago in its purest, most distilled form:

The moment you know … #ElMago got you.

Joe Maddon compared Javy's juke tonight to that of Gale Sayers. So naturally, we did our thing…#cubs @javy23baez @ChicagoBears pic.twitter.com/m4xoCWdDrs

Two exceptional displays of athleticism on the basepaths…..so, who did it better? pic.twitter.com/HLUQJsUhfE

Everyone was standing and cheering in the theater at the part when Javy juked the Infinity Gauntlet off of Thanos's jock.