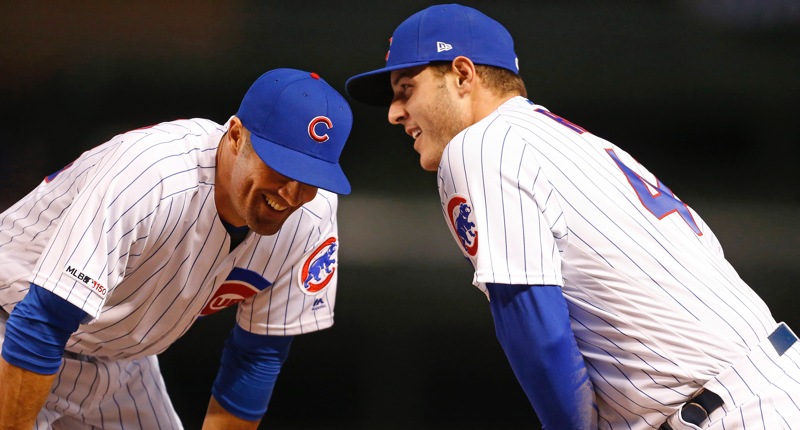 A confession: I missed Javy Baez’s home run live last night. We all have our “things,” right? Well, here’s one of mine: when I feel myself starting to get overly frustrated by a night game, I will sometimes take a break mid-game to go shower. Sometimes I don’t even need a shower … it just soothes me. But the “thing” part of it? I feel like I really often go do that, and then I come back to something awesome having happened for the Cubs. I know. I know. It’s so irrational. I can’t help it.

So, of course, I walk out of the shower last night to my phone going nuts to the Javy bomb, and then I got myself dry and dressed and situated back at my computer just in time to see Jason Heyward match Javy. So that was pretty awesome.

Hamels on 6 BBs: I was trying to get ahead of them & just couldn't really put them away. They were laying off a lot of my put-away pitches. I didn't want to give in … piping a FB just because I didn't want to walk a guy. Because these guys, they can be a little more dangerous

6th inning tonight – first time #Cubs had a pair of 3+ run homers (either 3-run HR or grand slam) in the same inning since 8/6/2008, when Mark DeRosa hit a grand slam and Alfonso Soriano hit a 3-run HR.

Who else is excited to have @JLester34 back on the mound? ✋ pic.twitter.com/nlRCXeBf8u

Bote fielding grounders at third base. Interesting if he receives more time there when Russell returns with Bryant playing more in outfield.

Why “Act Like You’ve Been There,” When You Can BACKFLIP Into Home? https://t.co/jwUELCuXqu pic.twitter.com/pTMa1dBuCM

Despite the Request, the 49ers Will Reportedly Not Trade Robbie Gould https://t.co/FHSAIybhzv pic.twitter.com/ZkIqrwJzq2

“With their first round selection in the 2019 NFL Draft, the Chicago Bears select … Khalil Mack, Certified Badass from Oakland CC.” https://t.co/JwaL8eAN13