Javy Baez, the Cubs' Starting Shortstop, is Lapping His Own Scorching Start from Last Year Skip to content 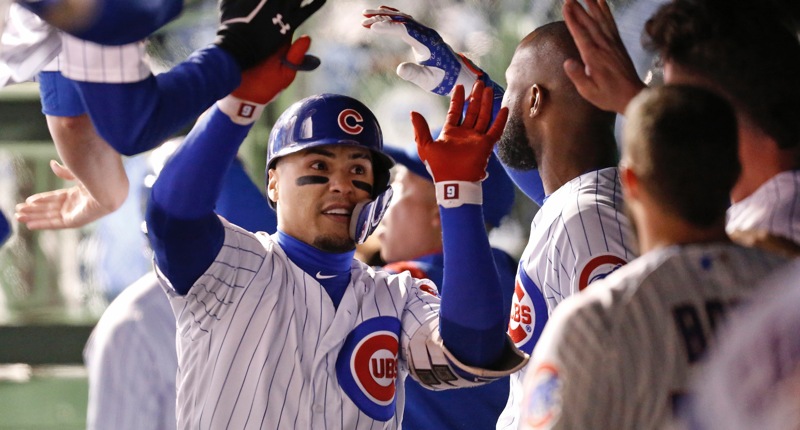 If I have to wake up every morning and enjoy the crap out of some more things Javy Baez did the night before, well sir, I will just accept that life.

Speaking of which, let’s enjoy his game-tying homer from last night one more time, but this time, from the crowd:

That was Baez’s 8th homer of the year already, something he didn’t do last year for another couple weeks.

Speaking of which, this blew my mind right after that homer:

Remember how Javy Baez got off to that SCORCHING start last year?

And he’s doing all of that while playing beautiful defense at shortstop, where he has been starting since late last year. Sure, he can still move around when needed, but it just feels like he’s the Cubs’ starting shortstop at this point, doesn’t it? It does to me …

More fun with Javy Baez’s stellar start to the year, and also teeing up the big question about what happens when Addison Russell returns from his domestic violence suspension (we’ll get more into that discussion later, but I wanted to share for now, mixed with the fun):

Jason Heyward: “We have a lot of special guys like that, but Javy is Javy.”

I gotta say, don't know how you can take Javy off short. He's made every play and his arm repeatedly shines. Throws from the grass look routine when he makes them.

Why would the Cubs move Javier Báez off shortstop now?

After a night of M-V-P chants at Wrigley Field, Joe Maddon didn't sound so sure about where Addison Russell would play once his suspension ends.https://t.co/RNCPn4QezS

Maddon when asked if it's going to be tough moving Javy off short: That's still a discussion we have to have. We gotta wait and see how well Addison does. I don't want to jump the gun without discussing in detail with the players themselves.

Maddon appears to leave door ajar for Baez to stay at short when Russell returns from suspension https://t.co/mOoZfmtWQJ via @suntimes