Epstein: Risking Interrupting Baez's Performance to Accommodate Russell Would Be a "Questionable Move" Skip to content 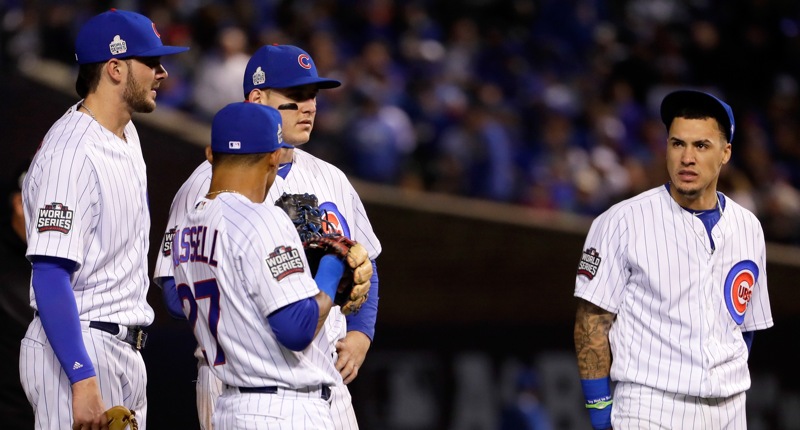 It’s the big question that necessarily attends Addison Russell’s anticipated return from his domestic violence suspension: how does he slot back in, given Javy Baez’s continued dominance?

For their part, the Cubs have done their best to be noncommittal, taking things day-to-day, and even noting that it’s not a lock Russell returns immediately next week when he’s eligible to be activated following his suspension on May 3:

Theo said it's definitely possible Cubs option Russell to minors after his 7-day stint is over if he's not ready to rejoin MLB team.

"I told him the other day – 7 days does not necessarily get somebody ready for a season."

But in a world where the Cubs do decide Russell is ready to return, and do decide their roster is improved with him on it, what happens when he comes back? Surely the Cubs *CANNOT* justify immediately making him the starting shortstop again, moving Javy Baez off of a position he’s owned since September, and at a time when he’s playing so well on both sides of the ball.

To that end, while President Theo Epstein wouldn’t say firmly that Baez is the starting shortstop period, he did say this (Sun-Times): “Addison is going to play some shortstop, and Addy’s also going to play second base. He’s also not back yet, so it’s a question for another day. But Javy is obviously right at the very center, along with some other position players, of everything good that we do. Risking interrupting that when we don’t have to would be a questionable move.”

Questionable, indeed. Baez, 26, is currently hitting .320/.353/.649 (160 wRC+), and is rating very well – by the metrics and the ole eyeballs – defensively at shortstop. Why would you mess with that, especially for a guy who has been suspended, and who was not a plus bat before that anyway?

I like the way Ken Rosenthal put it, and I suspect the Cubs do agree:

"You don't risk deflating one of the game's biggest stars to make room for a player who is lucky his team even kept him around." @Ken_Rosenthal discusses the Cubs' future plans with shortstops Addison Russell and Javier Báez. pic.twitter.com/t76kARuBNr

So, then, we should probably be looking to see if Russell plays any second base at Iowa in the coming week. If so, that’s a pretty clear signal that, when he returns to the big league team, the expectation would be that he would move around a bit.

Of course, even at second base, he’d be displacing guys like David Bote and Daniel Descalso, who’ve performed well. At that point, if the Cubs really want Russell’s glove in the middle infield, they may have to consider giving Bote more time at third base, and moving Kris Bryant more frequently into the outfield (ditto Descalso moving into the outfield at times). As a bench/utility player, Russell could be an excellent defensive addition to the roster. Expecting him to be more than that right out of the gate – setting aside our other concerns about his return – seems unreasonable, given his career trajectory at the plate.