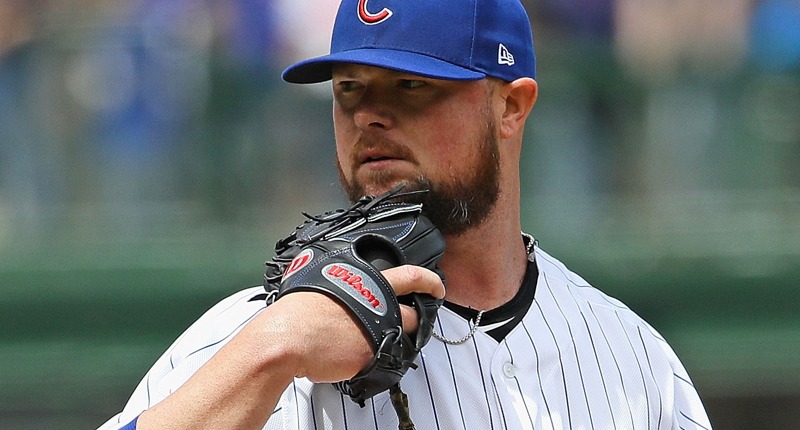 The Cubs weren’t able to pull off the sweep of the Dodgers yesterday, but my overall day was saved by Jon Lester’s big return to the mound!

In what was his first start in over two weeks (those pesky hamstrings), Lester returned to the Cubs without missing a beat. In fact, if he wasn’t on an artificially low pitch count, he would’ve probably been able to keep going beyond the five innings of one-run baseball he did manage to eek out against a very good offense, because boy did it look like he was rolling through that Dodgers lineup: 5.0 IP, 4H, 1ER, 0BB, 5Ks.

And, sure, if you were watching, you’ll know that he did let up a fair bit of hard contact when the ball was put in play (50%), but when you leave a game with a 50% groundball rate, no walks, and five strikeouts it’s pretty easy to say things were working for you. And upon closer inspection, I can see he actually had his highest swinging strike rate of the season – 10.1%, which would’ve fallen among his top ten starts last year.

Basically, it was just business as usual … which is nuts considering that he’s a 35-year-old pitcher coming off a 17-day layoff thanks to an injury to the leg he uses to push off the mound

“Felt fine. Felt normal,” Lester told Cubs.com. “It’s very tough, especially when you’re used to pitching every five days. It’s kind of like a caged animal for a couple of days there. Just really didn’t know what to do with myself. It’s a testament to our training staff. They kept pushing me and I kept pushing them. I got back a little bit sooner than I think everybody thought so [that’s] always good.”

As for velocity, Lester was actually throwing his fastball, on average, harder than he has in any of his previous starts this year (90.9 MPH) and the same goes for his cutter (87.6 MPH). He did throw his changeup a whole lot more than usual (nearly double, in fact), but it was working for him (62.5% strike rate, 18.8% whiff rate). Little, unexpected spikes in one pitch over the others is something I’ve grown accustomed to seeing from Lester, who’s one of the best improvisors in baseball. He’s always adjusting his game plan mid-game. That’s kinda his thing. Joe Maddon was understandably impressed.

Lester has now made, well, three-and-a-half starts this season (he was lifted early from his game against the Pirates for the very injury that shelved him for 2+ weeks) and the results are good … really good: 2.37 ERA, 24.4% strikeout rate, 7.7% walk rate. At 39.6%, his overall groundball rate is a touch low this season, but that’s actually two clicks higher than last year. And his 28.3% fly ball rate, in the meantime, is actually as low as it’s been since 2012 … which is a very good sign in this launch angle environment. With that said, he’s going to need improvement on his contact management, because hitters have been squaring him up quite a bit this season.

But again, he’s been all right so far (and for believable reasons) because of his unusually low fly ball rate. And if Lester has taught me anything over these last five years, it’s not to underestimate his results just because of his peripherals. That guy … he just finds a way to get the results, no matter what the underlying numbers say. I’ve seen people consistently outperform their peripherals – Kyle Hendricks does it quite a bit, actually – but Lester is an entirely different animal. He’s such a good pitcher in ways we might not yet fully be able to articulate with data.

And you know what else is an entirely different animal right now? The entire Cubs pitching staff. Pretty much as soon as Lester, the only pitcher throwing well at the time, hit the IL, the rest of the rotation stepped up in a big way.

And even Lester was enjoying the show: “It was fun to watch,” Lester said, per the Athletic, of the starters stepping up while he was on the injured list. “Cole (Hamels) and Q (José Quintana), and Kyle (Hendricks) kind of hit his stride a little bit there. (Yu) Darvish down in Miami threw the heck out of the ball. It was nice for those guys to kind of pick up my slack and pitch well.”

It’s easy to dream on this rotation, given the resumes of almost every arm on the staff (and even the depth), but it’s even easier to agree that this club is elevated by a healthy Jon Lester. Let’s hope that first game back is one of many more solid, healthy performances the rest of the way.

No more running first-to-third and whatnot.