WATCH: Benches Clear After David Bote Gets Plunked ... Mostly It Was Just Funny Skip to content 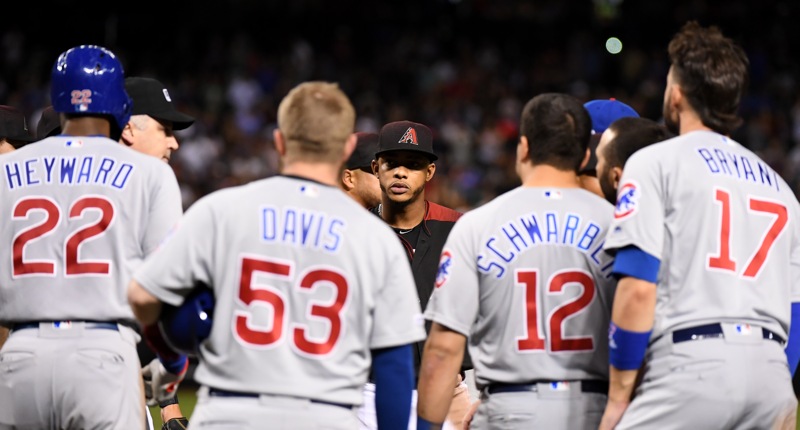 There’s only so much drama associated with a 9-1 drubbing, but one way it can arrive is when a guy who has homered twice already gets popped by a high-and-tight pitch.

The best part is David Bote immediately saying my bad my bad, after realizing that by saying anything at all on the plunking, he had just invited the benches clearing as they did. It did seem like the umpire was explaining to Diamondbacks manager Torey Lovullo that he heard something earlier that may have suggested there was animosity, so there might have been context here that we can’t see on tape.

Based on the earlier homers, on Adam Jones getting hit by Yu Darvish early in the game, and on the game situation, you could argue that was intentional if you were already leaning that way. It doesn’t *look* like a purposeful plunking to me, though. I could buy that maybe the Diamondbacks decided they wanted to go up and in to Bote because he was getting very comfortable at the plate. Consider it a put-it-in-his-mind pitch that wound up just running a bit too far inside.

For their part, the managers didn’t see anything here. Joe Maddon commented on everyone struggling with command, and Lovullo emphasized that this isn’t the way the Diamondbacks play (MLB.com): “I will say this: This isn’t old-school baseball. We don’t play that here. Just because somebody hits two home runs, we do not throw at batters. He hit two home runs. He deserved to hit two home runs.”

I don’t reckon we’ll see any spillover today, because there doesn’t seem to be anything here. If a pitch gets away from someone, perhaps there will be a little extra chatter as the bullpens mull whether they have to start jogging, but that should be about it.