By One Measure, Javy Baez Is the Best Baserunner in Baseball Skip to content 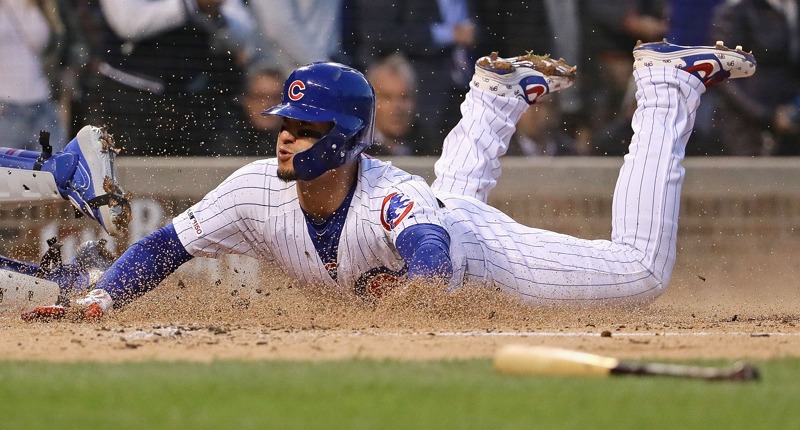 Javier Baez does a whole lot of good stuff on a baseball diamond, including slick fielding at one of the game’s most important positions, extremely strong offensive production at the plate, and, of course, some of the most impressive baserunning we’ve seen in a good long while.

He’s got good speed, but no, he’s not the fastest player out there, and he’s not going to lead the league in stolen bases. By now, though, we all know baserunning is so much more than that, and we often want to know who is a really good baserunner besides the ability to steal bases.

And as it turns out, in very measurable ways, Baez’s unique combination of speed, instincts, and guts may actually make him the best baserunner in baseball right now. For real.

Sports Info Solutions has developed a way to evaluate baserunning that sets aside stolen bases and overall speed. And unlike many other advanced statistics that leave people wanting a little less objectivity and a little more real-life impact, their base running numbers are calculated very uniquely: “[A]t Sports Info Solutions, we evaluate baserunning on a plus/minus scale, with Good Baserunning Plays (GBP) resulting in a plus and Bad Baserunning Plays (BBP) resulting in a minus. GBP and BBP are based on review by our Video Scouts, who use specific criteria in determining good and bad baserunning.”

And what do you know, since the start of the 2018 season, Javier Baez has more good baserunning plays than anybody in baseball – by a lot:

Perhaps even more impressive is that 6 of Baez’s 15 good baserunning plays have happened this season, alone – that’s more than all but 19 qualified base runners for ALL OF LAST SEASON in the first month of the year and more than double the next closest baserunner this season. WOW.

Of course, that’s only half of the conversation. Baez may have a lot of good base running plays, but he also tries a lot of crazy sh*t. And as it turns out, since the start of the 2018 season, he also has 8 bad base running plays. It’s not quite enough to pop into the bottom five in the league …

… but it’s obviously still a lot.

And yet, it doesn’t matter. Because when you do the plus-minus on the bestbase runners since the beginning of the 2018 season, Baez’s risk calculus is spot on. Here’s a look at the league’s best base runners net score, with Javy Baez on top:

What these rankings above show is that, although Baez has been caught quite a bit, he’s still succeeding enough to have the highest net good baserunning plays in all of baseball.

I really love this way of measuring it, because it reveals an equally talented, but more conservative base runner like Jason Heyward for the quality base runner he is. Like Baez, Heyward doesn’t have top-shelf speed, but his instincts and decisions are so very good. And with six good plays and just one bad since the start of last season, Heyward is recognized as one of the best base runners in baseball (which I think we all sort of knew to be true).

Now, obviously, this isn’t everything. Being really fast and/or stealing as many bases as someone like Billy Hamilton is always going to have unique, separate value, and if you were grading the totality of being a baserunner, it’s not like you’d exclude that stuff. But when you think solely about the things a baserunner can do to help his team while running the bases on active plays, Javy Baez is the best in baseball.