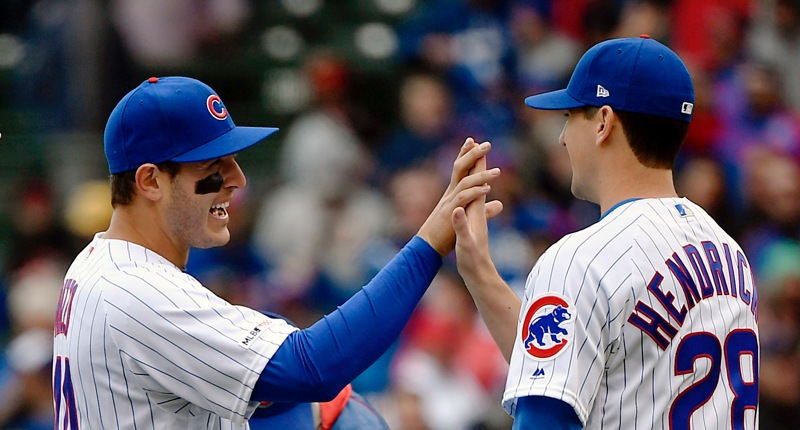 The Wife *AND* The Little Girl are presenting at a conference today, which is really awesome. I have seen The Little Girl’s presentation, and it is captivating. In the meantime, I’m hanging with the other two kiddos today, which includes some Soccer Dad duties. In turn, that means I’ve got to try to sprint through these Bullets, otherwise you won’t get them for a couple hours. Let’s see if I can do it … [UPDATE: nope. Sorry.]

Completely random, but Jon Lieber (fewest pitches for Cubs in a Maddux) and Carlos Zambrano (last Maddux thrown for Cubs prior to Hendricks today) stopped by clubhouse briefly postgame.

‘Look, I did it!’: A look at Kyle Hendricks' brilliant 81-pitch Maddux https://t.co/MCBUhkxpD5

The last two Cubs to throw a Maddux were at Wrigley to see Kyle Hendricks do the same. Two of the eight men to ever do it with fewer pitches were there as well. And clubhouses across baseball stopped to watch the rare feat. https://t.co/MCBUhkxpD5 pic.twitter.com/LFcVCtOhzg

That's twice as many as the next closest team in baseball and the most shutouts in the team's first 29 games since at least 1908, per postgame notes.

Mike Montgomery gives the I-Cubs a strong start and is our @EMCInsurance Player of the Game! pic.twitter.com/xfELOGKase

Heads up: the Echo Dot is on a huge sale today, under 30 bucks. Take advantage: https://t.co/kZjxRGk3y7 pic.twitter.com/pUyzw6AfX1