The Yu Darvish Post-Start Anthem Returns: Bad Results and Everyone Offering a "But, But!" Skip to content 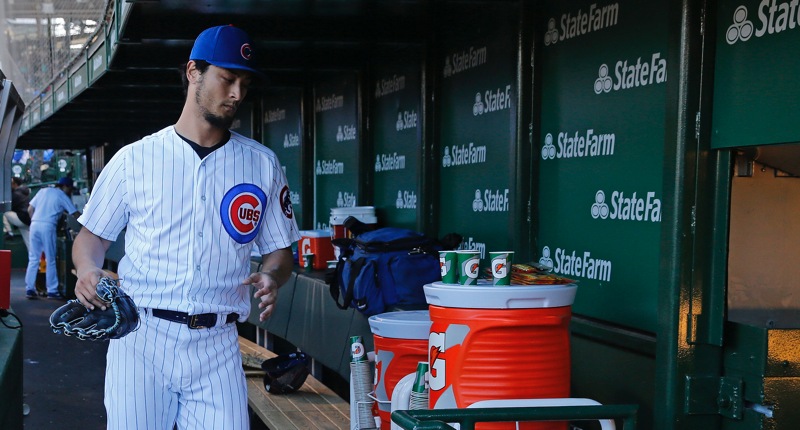 Stop me if you’ve heard this one before: Yu Darvish had terrible results yesterday, but …

It’s almost become an anthem following a Yu Darvish start. The results were plainly bad, but we can discuss some things that explain, defend, soften, whatever those results, and offer hope for the next start. You’ve heard this spiel so many times before, and even if what we discuss is accurate and fair, you can do this only so many times before it’s like, “Yeah, I get it, but at some point it *HAS TO* translate to results for me to care.” I’m right there with you. I think it’s still a good idea to analyze, but please know that I agree: I need results now. It’s time.

And even yesterday, the “but!” is pretty thin. It’s absolutely correct that Darvish had some really bad BABIP luck yesterday. The Cardinals posted a .417 BABIP for the game, despite just *one* of those balls in play having a better than 65% chance of being a hit. Pretty much all of the coin flips went for hits, AND two of the doubles had a less than 5% chance of being a hit. That’s some seriously bad luck on balls in play.

Still, Darvish’s command was so bad that it’s not like he was making his pitches, getting bad contact, and then getting unlucky. Instead, Darvish was making a fair number of bad pitches that just happened to not get hammered. He netted just nine whiffs in the game, low-ish for him and a decent indicator that the stuff and command were off. Then you have the FIVE walks in just four innings. That crap simply cannot continue. Darvish’s walk rate on the year is up to 17.8%, which is absolutely unplayable. Because when you’re putting that many free runners on base, a moderately bad luck BABIP day like yesterday can kill you. Which, ta-da, it did.

It was also very strange to see how many two-seamer/sinkers Darvish was throwing yesterday. It is not his primary fastball, and yet he threw it a whopping 46 to 49 times (depending on your classification system of choice). He threw his four-seamer essentially not at all, which is so dramatically out of whack with typical usage that it makes you wonder what exactly happened.

Indeed, Jordan Bastian DID wonder, and Darvish explained that he simply felt good about the pitch yesterday (despite throwing it barely half of the time for a strike). “I was talking with Tommy [Hottovy] after the game,” Darvish told Bastian after the game. “My fastball was really good today. My [history] is I can’t throw a strike with a fastball. But now, I can throw more strikes with a two-seamer. So, I can build on that more. I’m close.”

I mean, sure, it would be nice if Darvish could throw his fastball – whatever fastball – more consistently for a strike, but again, it was barely at a 50% strike rate yesterday, so I’m not exactly sure how you come to that conclusion. Maybe there was some underlying stuff that he and his pitching coach can see that point toward some fastball command improvement down the road. It was not immediately apparent to me.

We also know that there’s a mental component to Darvish putting it all together, and it’s hard to know how the Cubs right that ship for a 32-year-old pitcher who likely is mostly who he is out there on that side of things. But it stings a little to see quotes like this after the game from the manager (via Bastian): “We’ve got to get him to the point where that’s more consistent. But the stuff — physically stuff — good. It was looking good. I think the ground-ball base hit by the pitcher kind of messed with his head a little bit. And then, of course, another ground ball base hit.” You don’t want to speculate about how the “moment” impacts a guy’s psyche, and, thereafter, his performance, but this is not the first time we’ve seen and heard about Darvish letting a situation mess up his performance thereafter. That’s not good, and when you’re a guy who is walking so many in the first place, you’re going to have a lot of situations presented that could “mess with your head a little bit.”

So, just one start after Darvish finally put together a really good six-inning outing, we’re right back to the place we’ve been after almost every single start Darvish has made with the Cubs: hoping something good came out of it, and it’ll actually show up on the mound next time out. Not sure what else there is for us to do, as fans, at this point.