Kris Bryant's Return Is Just Getting Started Skip to content 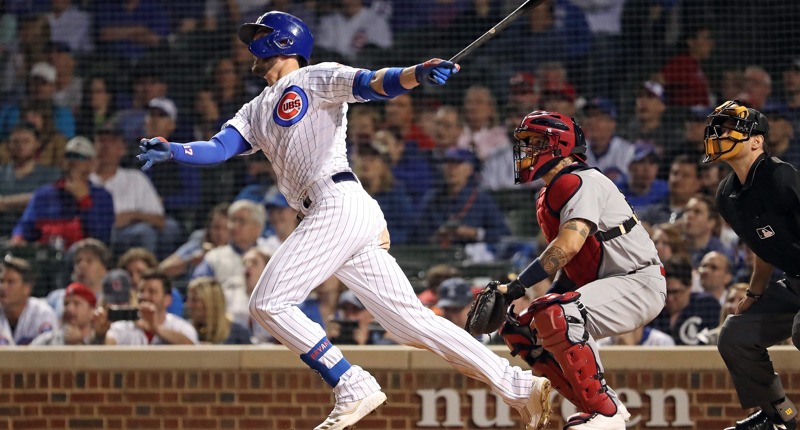 Although the Cubs have had fairly excellent offensive teams since the beginning of this competitive window (2015), I’ve often felt like they were always one player short – at any one time – of their full offensive potential. It wasn’t always the same player, mind you, and, again, in the aggregate they were almost always great. But I’ve just felt like the circle was never quite complete for any meaningful stretch of games.

Like, you know how you felt the first time you saw this?

That’s what I’ve been looking for from the Cubs core offensive talent (Anthony Rizzo, Kris Bryant, Willson Contreras, and Javier Baez, if you pick four). Indeed, at the very beginning of this season, Javy Baez and Willson Contreras were doing terrible things to baseballs, but it took Rizzo a while to join them, and Bryant was still trailing far behind.

But now, with the conclusion of the Cardinals series and the heroic return of the Kris Bryant we all know and love, I think we’re finally there.

This is an Avengers-level group of offensive performers. This is what it looks like when star-caliber talents are going right at exactly the same time. And, frankly, it’s only been getting better as Kris Bryant has finally started being himself again.

As you look at those numbers, I’m sure you’ll notice that Bryant has the lowest overall production for the season as a whole, but given how slow he started, that 125 wRC+ is actually pretty fantastic. And he would agree: “I’ve been feeling really good at the plate. [In] Arizona, Seattle, I feel like I’ve been hitting the ball so hard.”

… but it really goes back much further than that.

And arguably during that stretch … he was incredibly unlucky.

For his career, Kris Bryant has averaged a 36.1% hard-hit rate and a .342 BABIP. This season, he’s averaging a 41.4% hard-hit rate with just a .277 BABIP. And during this most recent stretch, he’s averaging a ridiculous 48.8% hard-hit rate with just a .275 BABIP. Put differently, he’s hitting the ball harder than he ever has in his already extremely impressive career and is still getting fantastic results despite a BABIP some 67 points beneath his career average. If anything, his BABIP should be even higher than usual. So, yes, this stretch has quietly been bananas.

And before you think he’s just beating the ball into the ground or something, he’s not. Brendan Miller does an excellent job of illustrating some of Bryant’s improvements in a few charts right here:

In almost every aspect of his offensive game, Kris Bryant has started once again destroying the baseball.

Even if his luck never regresses to more normal/expected levels, his already solid, season-long 125 wRC+ will begin ticking up to match the performance he’s posted lately (164 wRC+). But if he also starts getting the favorable bounces he’s more or less earned … well, watch out. We may just have an MVP race on the Cubs … between several players.