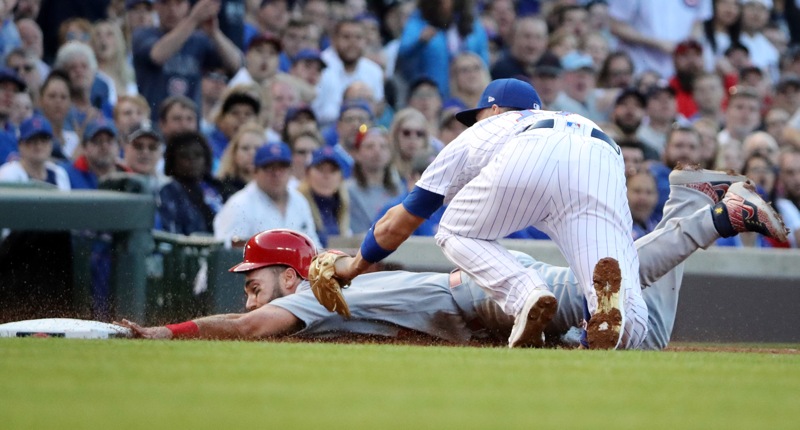 Although the team committed three errors in the game last night, and also scored 13 runs, obviating the need for killer defense, I do want to spotlight some very nice plays last night. Can’t let the offense get all the attention.

Javy Baez, a shortstop, has continued to play very well in his new permanent role, and he makes these extremely-deep-in-the-hole plays so often and so easily that you can forget how hard it is to pull off, and how other Cubs shortstop options would not be able to do the one on the left:

Stellar back-to-back plays for Cubs rover Javy Baez in the 5th. Throws out Wainright from the left-field grass. Then, playing in a shift, gets Carpenter on a tough play in right field. pic.twitter.com/IV5kFDhk2D

Ben Zobrist was out in left field last night, and despite the fact that he’s set to turn 38 later this month, he was flashing the leather like a much younger man:

Bonus: Matt Carpenter sure does like getting tagged in the face by the Cubs, eh? That was yet another to add to the pile:

That was just perfectly done.