An Unusual, Inexplicable, and Probably Not Repeatable Bad Night for Pedro Strop Skip to content 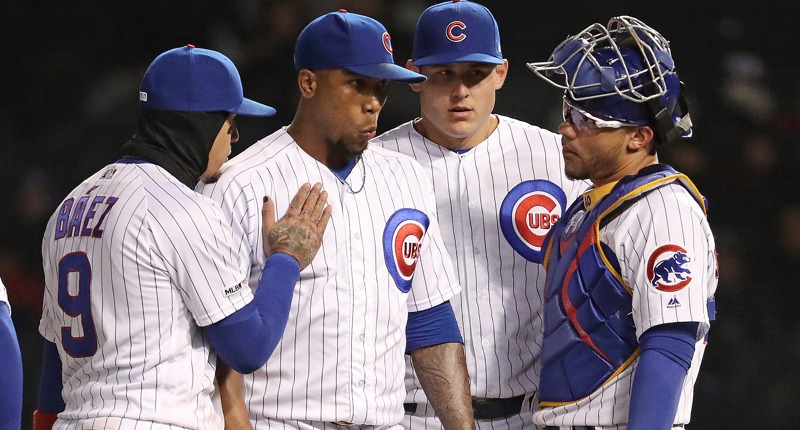 Monday night’s matchup against the Marlins didn’t go quite as planned for the Chicago Cubs or Pedro Strop, who entered the game with a 1-run lead against a team with the worst overall offensive production against right-handed pitchers in all of baseball (69 wRC+) … before blowing that lead and being removed without securing a single out.

But things didn’t just fall apart normally. If they did, we probably wouldn’t need this post. After all, sometimes blown saves just happen and no one is expecting fill-in closer Pedro Strop to be perfect all the time. Instead, it’s the way things fell apart against that particular team that beckons our attention (mainly, the walks). So here I am, answering the call.

Let’s start with the actual play-by-play, to set the mood:

*Pedro Strop is removed from the game.

Let’s forget about what happened next (although the additional two runs were charged to Strop, he wasn’t on the mound at the time) and focus on those four plate appearances, particularly the three walks, because they were very un-Strop like. How un-Strop like were they? Well, according to Jordan Bastian, that was the “first time in 517 career games that Pedro Strop issued 3 walks in an outing with no outs recorded,” and only the “third time he’s had 3 walks in an appearance” at all. Clearly, Strop wasn’t himself. Let’s zoom in and enhance. 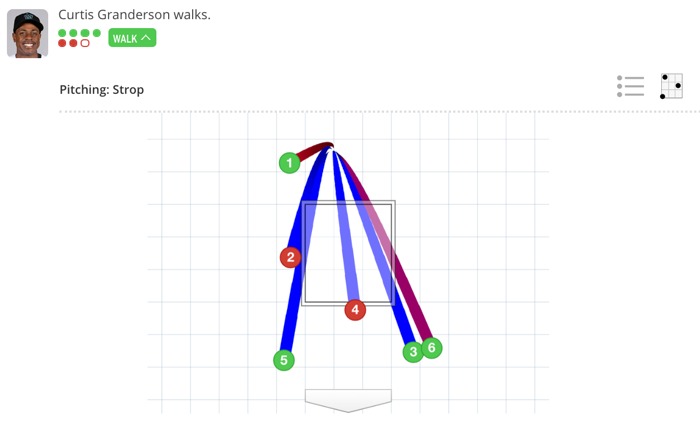 And this was the closest Strop came to not walking one of the three batters he walked. Now, to be fair, Granderson has a really solid 11.1% career walk rate, which he’s actually beating just barely this season (11.2%). And against right-handers this year, his walk rate actually ticks up to 12.4%. I’m bringing this up only to point out that while the Marlins, collectively, have one of the bottom three walk rates in baseball this season, Granderson, in particular, is a really patient hitter, who’s been more than willing to take a free pass.

And this is when things really began to fall apart, anyway. 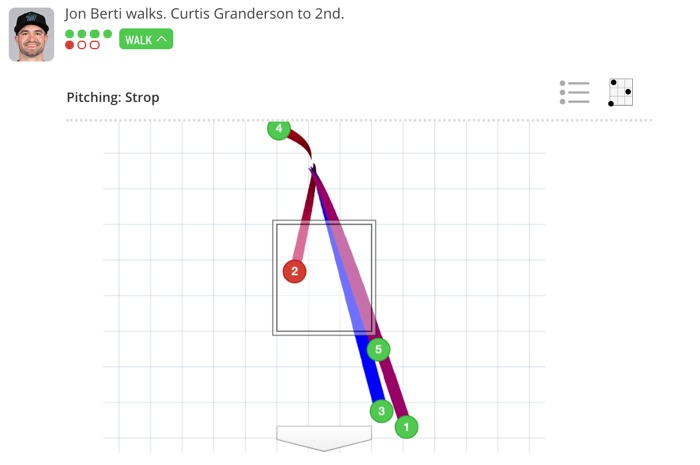 As you can see, Strop wasn’t anywhere near the strike zone in his second plate appearance of the inning, missing with his cutter twice (very unusual for him), his four-seamer, and his slider. The lone foul-strike of the at-bat was registered as a two-seamer at a low 93.5 MPH. Oddly enough, Berti actually has an even better walk rate this season (14.6%), though it is slightly lower against right-handed pitching (11.1%) and this is in all of 36 plate appearances. Given how wildly Strop was missing in this at-bat, I don’t think it’s fair to credit Berti’s patience or to let Strop off the hook.

Strop managed to get back in the zone for his two pitches against Walker, but while the first was fouled away, Walker got him on the second with a 100 MPH, 300 foot line drive to right field. That loaded the bases for the final at-bat of Strop’s night.

In his final batter faced, Strop managed to get one called strike in the zone, but only after pushing the count to 3-0 with the bases loaded. In other words, Herrera wasn’t swinging no matter what. 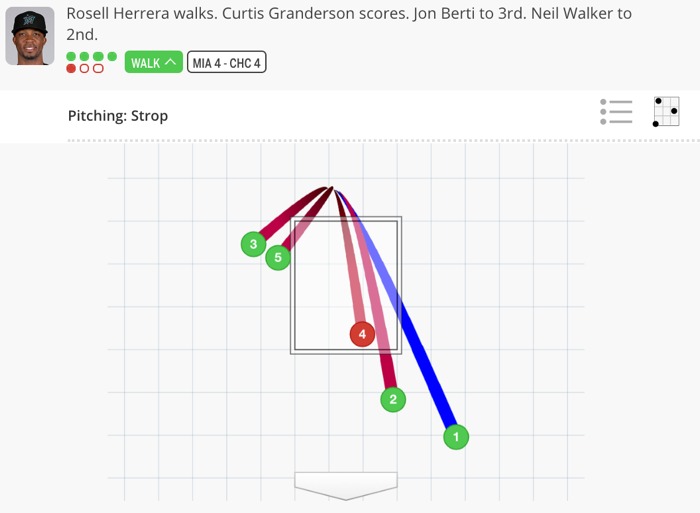 And unlike the hitters that came before him, Herrera has a pretty low career walk rate (6.2%) – so, not much of an excuse there (not that there was for the first two guys either, considering their overall offensive deficiencies and the importance of the moment).

So together, Strop threw 18 pitches last night, 12 of which were called balls. Of the six that were not balls, one resulted in a 100 MPH line drive, one was a 3-0 called strike, and one was arguably a missed call (i.e. out of the zone). That’s not good. But also, like we said, so un-Strop like.

In fact, before last night’s game, Strop had walked just two batters all season long (5.4% walk rate in 10.2 IP). Indeed, even if you go all the way back to the beginning of last August, Strop’s walk rate is still under 7.0%. In general, he just isn’t a guy who loses his control that badly very often.

Unfortunately, it’s not that easy to understand why last night happened. From what I can tell his velocity was down a bit last night (he was roughly a MPH short on his fastball, slider, and cutter), so it’s possible he wasn’t quite feeling himself. But his horizontal and vertical release point was pretty consistent with his last appearance in St. Louis. 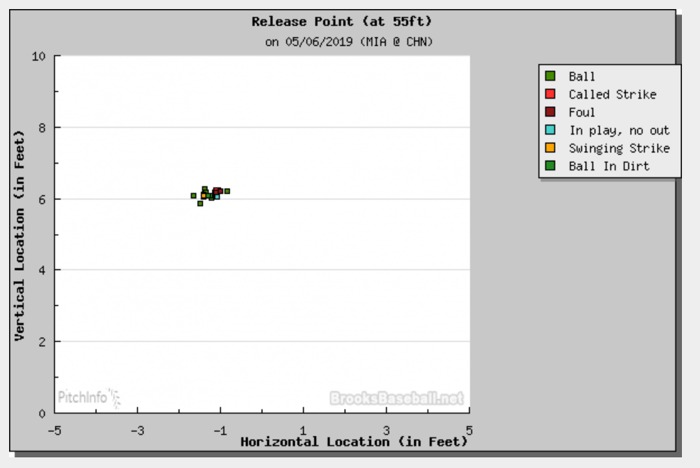 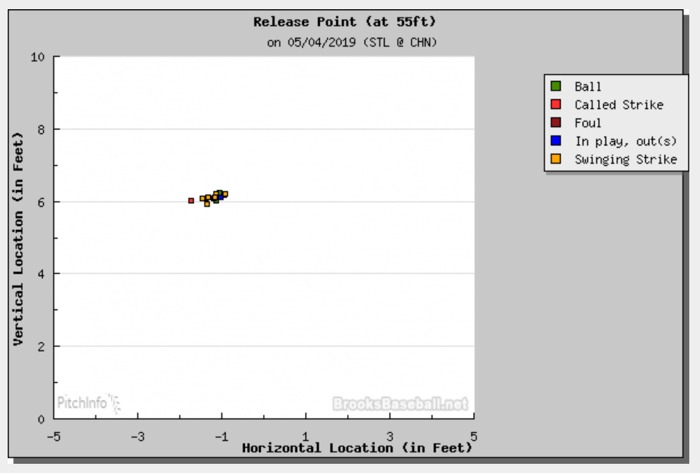 Point being: If a guy is feeling fatigued or just not quite right, you might see his vertical and/or horizontal release point out of whack – both within that particular appearance and against his previous outings as a whole. But neither seems to be the case here. Joe Maddon doesn’t have much more of an explanation either: “I don’t know. He was just off,” said the manager. “Velocity was down. He was just off. That’s what I saw.”

And without any notable post-game comments from Strop, himself, I’m not quite sure how to explain it. Perhaps it’s best we just chalk it up to an extremely rare and an unusually wild performance for a guy who’s rarely anything but consistent?

Just a friendly reminder that this is Pedro Strop’s 7th season with the Cubs and he’s never posted an ERA higher than 2.91.

Strop has been consistent, really good, & a lot of fun since coming to Chicago. pic.twitter.com/OmMdZAy7Jq