Yes, Kyle Ryan Screwed Up, But Don't Hang That Loss on Him Skip to content 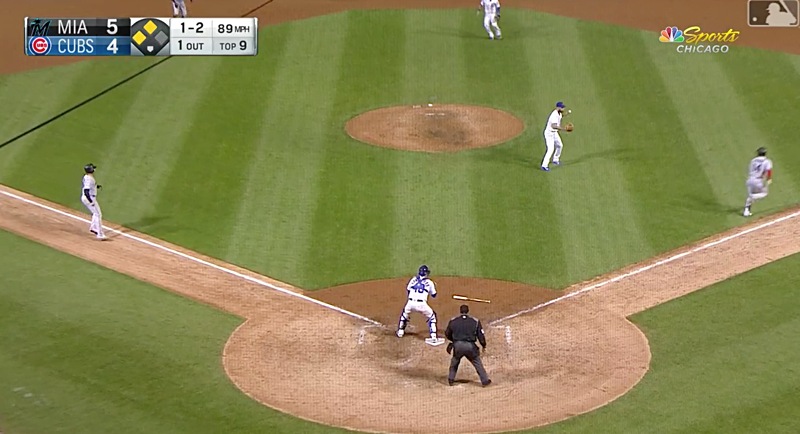 Your closer just loaded the bases and then walked in the game-tying run. You’ve been tasked with warming up with lighting quickness, and then coming into a bases-loaded situation, with nobody out, trying to maneuver out of it without the benefit of any kind of prep, match-up advantage, or breathing room. Good luck, dude.

That was Kyle Ryan’s situation last night in the 9th inning, and that is perhaps the biggest reason I’m not angry at him this morning. He came into an impossible situation, and he got two groundballs. That’s good!

But obviously there is a little more context to his performance, which ultimately allowed two runs to score, the second of which may not have had to score. With one out, and the lead run in, Ryan got a comebacker and caught the runner at third way too far down the line. Ryan did what you’re supposed to do in that situation, stared him down, and then … for some reason completely unknown, he threw to first base, allowing that runner to score:

Obviously, what you’re supposed to do there is freeze that runner, and then run straight at him until he commits. I know it. You know it. Kyle Ryan knows it. Instead of freezing the runner, he himself froze. It just happens sometimes, and you do no good by beating a guy up for it:

This was the moment Kyle Ryan looked home in 9th, before opting to throw to first base. Walker scored and that sixth Marlins run was the decisive one.

Said Ryan: "I just froze. Checked him and it ran through my mind, and I froze." pic.twitter.com/xb6e2ZU0Iu

It’s only fair to point out, too, that even if he executes that play perfectly, it’s entirely possible that the Marlins wind up with runners on second and third and two outs, and who knows what the next guy does, right? It is *conceivable* that things get worse for the Cubs without that makeshift double play, and we’re only feeling worse about it now because Kris Bryant happened to hit a solo homer in the bottom of the frame.

It’s also fair to point out that the Cubs grounded into four double plays in the game. That Daniel Descalso struck out looking in the 9th ahead of Bryant’s homer (which maybe he doesn’t even hit if it’s a one-run game because he’s pitched differently). That Javy Baez and Willson Contreras struck out in the 9th with the tying run on base. That Cole Hamels allowed three runs in his six innings of work. Etc. Etc. And, of course, that Pedro Strop could not throw a strike against a group of nothingburger hitters in the 9th.

Ryan goofed, visibly and obviously, but anyone hanging that loss on him is seriously misguided.

As Anthony Rizzo put it to Cubs.com after the game: “That’s a tough situation to come in in the ninth there. We all have his back. He’s been really good for us since he’s been here. … I’m sure Joe will put him right back in there tomorrow. We have all the confidence in the world in him.”

To that end, I do hope there’s a quick opportunity to reiterate that confidence, on the field, in Ryan for the Cubs going forward.

Because here’s a very tricky situation percolating: lefty Mike Montgomery is basically ready to return, and, given the full rotation, that means he’ll head to the bullpen. Unless there’s a phantom injury somewhere, he’ll either have to replace a guy who has no options and gets waived (Allen Webster? He hasn’t really shown it yet, but the front office has been SO HIGH on his talent, and I highly doubt he clears waivers), or he’ll have to replace a guy with options left. That would be Carl Edwards Jr. – who just came back after pitching very well at Iowa, and looked OK last night – or Ryan. Would the Cubs really option Ryan, one of their best bullpen arms so far this year, right after a night like that? If so, they better make sure it’s CRYSTAL clear to him that it’s solely a matter of managing the roster, and has nothing at all to do with his performance.

Of course, if it has nothing to do with his performance, at a time when the Cubs need the best arms they can get, should he even be optioned at all?