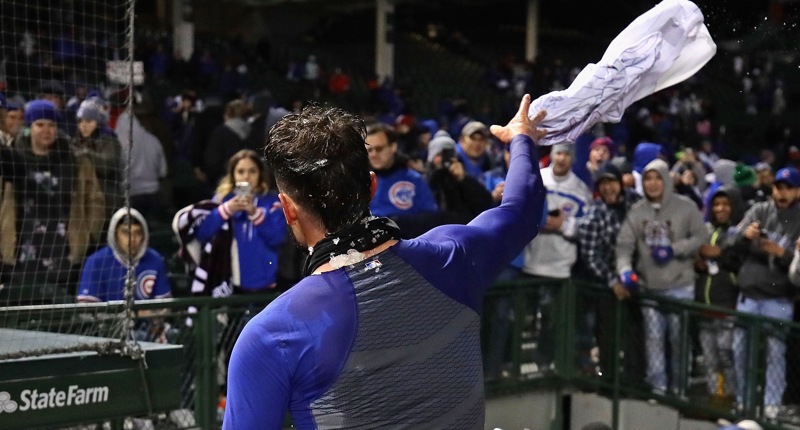 Late last night, with the specter of extra-innings looming, Kris Bryant took it upon himself to say eff you to the wind, and drive a 99 mph fastball more than 400 feet out to center. Cubs win. Cubs walk off. Everybody smiles.

The homer was just Bryant’s third career walk-off homer, with the other two – against the Rockies and the Indians – coming in his rookie season. Those were a couple of very memorable shots.

That homer also marked the third game in a row with a Bryant homer, and it’s the first time he’s done that. The shot, together with his triple earlier in the game, pushed his season slash line up to .250/.381/.508 with a 137 wRC+, a figure already better than last year or his rookie year, and just 11 points shy of where he was in his MVP campaign. His strikeout rate and walk rate are currently the best of his career, and his ISO is right there with his MVP season as his best ever.

He’ll cool off at some point, obviously, but right now? Bryant is healthy and pushing himself to even higher heights than he’s already seen in his very good offensive career. So much for people who were worried he was done or need traded or whatever other insanity folks were spouting.

More fun from the big night …

Only needed one run, but our friend Kris provided three. #EverybodyIn pic.twitter.com/snCHYftTYD

Kris Bryant: first #Cubs player with a triple & a walkoff home run in the same game since Larry Biittner 4/14/1978

"Nobody in that clubhouse doubted that he would be back to being Kris Bryant." https://t.co/OrtSAWv4FB

Kris Bryant, after his walk-off on a 30-degree night at Wrigley:

"It was a cold one. I honestly didn't want to play extra innings. Nobody would like that. I was thinking back to Arizona, I was like nope, we're not gonna have that today. That was fun. I really enjoyed that."

"We must destroy him." pic.twitter.com/fCHrhQbSj1