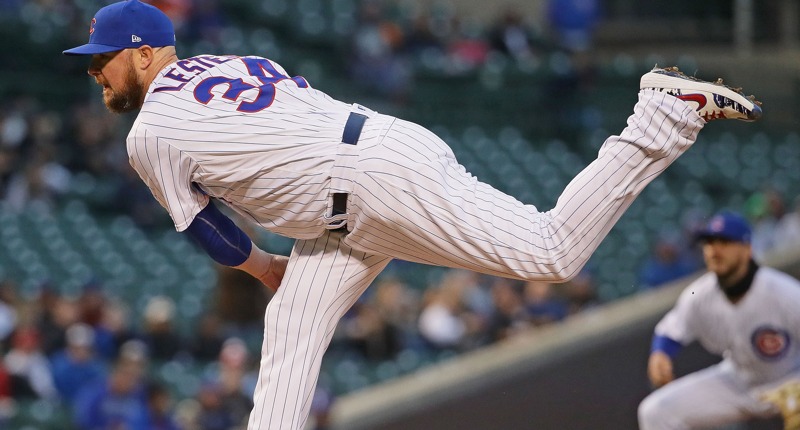 Jon Lester is off to a blazing hot start this season, but that’s something we’ve seen before, right? Looking back through his first six starts of last season, I can see that he was once-again getting crazy-good results (2.73 ERA) while working his way towards securing a spot on his fifth All-Star team.

But there’s actually a huge difference this year.

Lester was getting the results last y ear, sure, but he arguably wasn’t really doing it in a sustainable way. In fact, with a FIP nearly two points higher than his ERA, together with a number of other indicators, we can (and did) say he was probably getting unusually lucky. And a closer look at the peripherals confirmed as much: 19.0% strikeout rate, 9.2% walk rate, .253 BABIP. Lester still finished the year with an excellent 3.32 ERA, but that number was 4.50 in the second half.

So far, even as the hot starts are similar, things are very different this season: Through six starts here in 2019, Jon Lester has an even better 1.41 ERA (which would rank first in baseball if he qualified (and he’s only an inning short)) than he did last year, and this time his 2.95 FIP (12th best in MLB) is indicative of more worthy underlying numbers.

Last night was just his latest display of dominance:

Through 6.0 scoreless innings pitched, Lester allowed eight hits, but walked exactly zero batters while striking out six. He has now walked one or zero batters in four straight outings, a period during which he’s struck out 23.

Now, it hasn’t been entirely rosy for Big Jon this year, as evident by his 39.3% hard-hit rate (among other things, like an unusually high strand rate), but there’s a couple very important caveats to both points. For one, the league average hard-hit rate is WAY up at 37.1% this season. So although that figure looks high at first, it’s not quite as out-of-whack as it appears. As for the strand rate, well, perhaps it’s crazy high at 90.3%, but when you’re striking out so many batters, that’s almost necessarily going to raise your strand rate, too.

And for another, more important reason: THIS IS JUST WHAT HE DOES.

Although there are of course going to be outliers, you can almost always lump pitchers into certain categories. For an example: Yu Darvish is a strikeout pitcher and Kyle Hendricks is a contact manager. Some guys (like, say, 2015 Jake Arrieta) are both. And other guys are neither. And, of course, there are also other ways to succeed too! But it’s not totally unfair – even if it is a bit crude – to start there and investigate further. Except when it comes to Jon Lester.

As I’ve gotten to watch and analyze Lester over these past five seasons, I’ve come to really appreciate that flexibility is his biggest asset. On any given day, Lester will completely change his approach on the mound depending on (1) what’s working for him, (2) what’s working against the opposing lineup, or (3) how his velocity/command is landing. And that’s no small feat. It takes a very good pitcher to not only quickly recognize what’s working (or not), but to decide how to change it, and then actually effectuate those changes almost immediately. And yet, in any one start, Lester can do that. And that’s how he’s been so successful.

But maybe you can apply that lesson to him over a period of time greater than just a single start.

When Lester first came to the Cubs, for example, he was an excellent contact manager. Back in 2015, he had a 48.9% ground ball rate, a 21.0% soft-hit rate, and a 29.0% hard-hit rate. And during his Cy Young runner up campaign a year later, those numbers were pretty similar. His strikeout and walk rates, however, have been trending in a very different, worse direction ever since.

Indeed, last season, Lester posted his lowest strikeout rate since 2013 and his highest walk rate since 2011. But this season, those numbers are as good as they were since arguably his best season in MLB (2015):

And on a K/BB average, his 4.71 mark here in 2019 is actually better than he’s ever posted in his entire career. That is not to say Lester is suddenly a strikeout artist, but also, I mean … he’s kinda doing it.*

*The pessimist among us might point to rising strikeout totals across the league, but to that I say (1) that has been going on for the last few years as his strikeout rate was free-falling, anyway and (2) it could just as easily be a sign that Lester adjusted his approach to exploit that very league-wide weakness. Again, after watching him for so many years, there’s really nothing I’d say is beyond his reach.

I have no clue what the future holds for Jon Lester this season, but he has been getting absolutely fantastic results early on with the peripherals to match. And although he’s not succeeding in the exact way we’re used to seeing from him, we know he’s capable of so much more than the usual arm.