Ian Happ's Strikeouts Are WAY Down at Iowa (Hooray!), But There's a But (Oh) Skip to content

It was no secret that Ian Happ was both out of sorts and ticked off when he was sent to Iowa near the end of Spring Training. And those elements likely contributed to his slow start, one that made him look a lot more like the below-average player from the second half of the 2018 season, than the higher upside talent he otherwise can be.

Recently, however, we’ve seen signs of the worm beginning to turn.

We don’t know the directives Happ received when he was sent to Iowa, but it seems fair to assume “Strike out less” was one of them, and lately, he’s been doing it.

But while his overall .244/.359/.403 batting line is only good for a 93 wRC+ in the insane Pacific Coast League, to the extent his work in Iowa will be judged mostly by his K rate, it seems fair to ask if the Cubs brass has almost seen enough, as it’s dropped through the floor.

However, there is more at play here. It seems clear that the onus Happ has put on contact has resulted in a significant change to his overall batted ball profile. Happ, who had (nearly) mirror-image 40% groundball rates in his two years in the Majors, is hitting into ground balls over 55% of the time in Iowa. And that number has ticked up even further since his strikeout rate went down.

Clearly there’s been a trade-off of strikeouts for groundballs. Overall, this is a good thing, if (and it’s a big if) there is no larger drop-off in power as a result. Groundballs over K’s will do wonders for your batting average. Or, at least it should. Here has been Happ’s batting average by batted ball type this season (again, before last night):

NOTE: As I’ll always warn with minor league batted ball designations: we should put some error bars around these numbers.

In the long run, he’s likely to see that groundball number come up, while that line drive number is a bit unsustainable. Still, you would imagine the focus will now be on finding ways for Happ to continue his progress in contact rate while still raising his launch angle enough to elevate the ball at his career averages. It’s a tricky balance, this ‘change, but not too much’ developmental assignment he’s on. 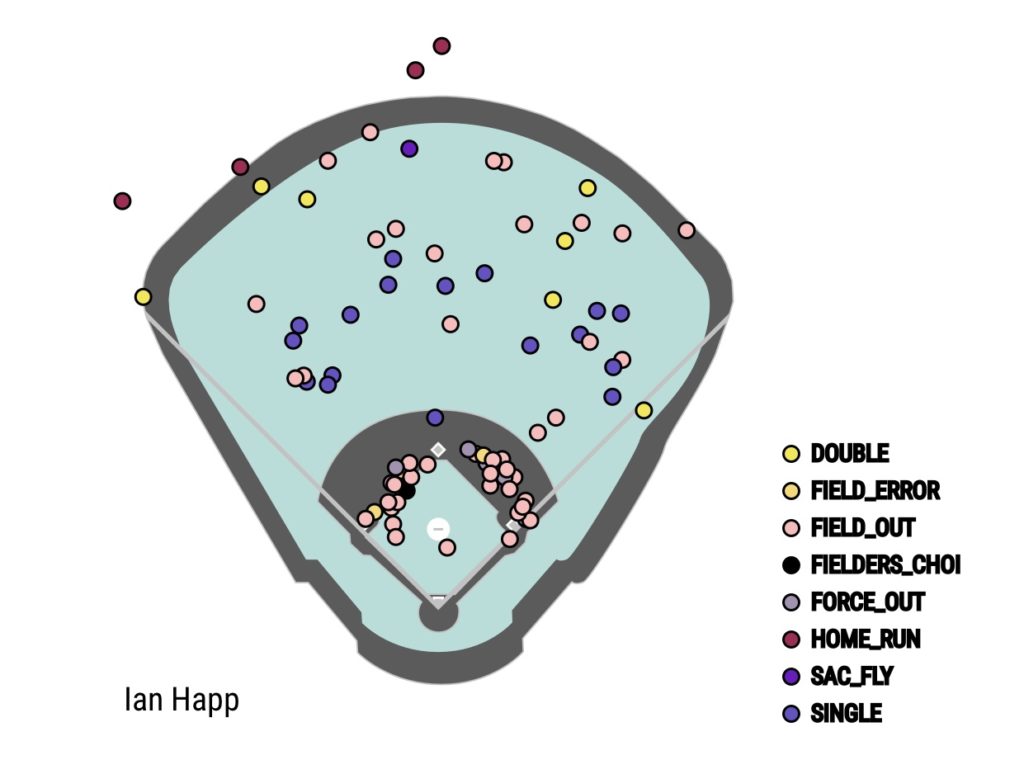 The good news to me is that while the sheer number of ground balls do stick out, Happ is clearly still hitting plenty of balls a good distance. In fact, you see about seven outs there on balls traveling a stone’s throw from the outfield fence. Luck hasn’t totally been Happ’s friend so far; if he finds good fortune to mix with a good strikeout rate, you can bet he’ll ride a hot streak right back to Chicago.