What a "Start" By Mike Montgomery Skip to content 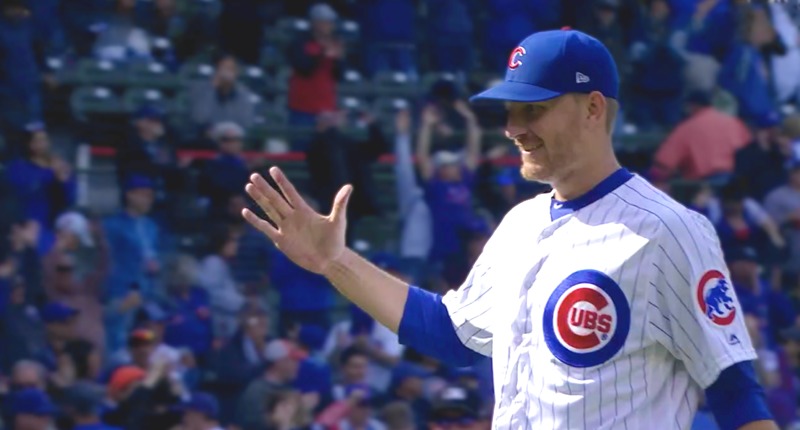 I knew I’d be writing up a Cubs starting pitching performance this morning, but I just assumed it would be, you know, the guy who actually started yesterday’s game.

Unfortunately, Yu Darvish lasted just 4.0 innings for the second consecutive start and walked six batters en route to the early hook. He may have allowed just 1 hit and 1ER during his time on the mound, yesterday but six walks is just … too many walks for my blood. I think I just need a mental break from him. And Mike Montgomery is the perfect distraction.

In his long-awaited return from the injured list, Montgomery, who had been  preparing as a starting pitcher during his rehab assignment, twirled 5.0 scoreless innings against Miami, with just three hits and two walks against three strikeouts. Obviously, that sort of performance is brilliant right there on the surface (in that it helped the Cubs win the game and the series), but I’m happier still that he was able to save the entire bullpen ahead of a big series against the Brewers. That could be huge this weekend, especially as the Cubs go on without Pedro Strop for the time being.

If you weren’t able to catch his “start,” take a look:

Although Montgomery didn’t rack up a ton of strikeouts yesterday, he was clearly still missing bats with 11 whiffs overall in just 5.0 IP, most of which came on his curveball (7). But while that’s impressive, the real story of his day was all the weak contact on the ground.

Montgomery has always been pretty good at inducing ground balls – and when he can, he’s usually at his best – but yesterday was an especially impressive performance: 69.2% ground ball rate. In an era where everyone is trying to elevate the ball, that is pretty outstanding – even by Montgomery’s standards … which are quite high.

Last season, for example, Monty averaged a 51.5% ground ball rate. And for his career, that number is up even higher at 54.5%. And since I’m not sure we’re all familiar with the context, check out the ground ball rate leaderboards since Montgomery broke into the league:

As you can see, Montgomery’s 54.5% career average has been one of the highest ground ball rates in baseball over the last four years … and yesterday he was getting ground balls at a 70% rate over 5.0 full innings. That’s just good stuff right there.

Better yet, no one was making any solid contact off Montgomery. Despite a league-average hard-hit rate of around 37% this season, the Marlins made hard-contact just 30.8% of the time. If you’re forcing the opposing team to drive the ball weakly onto the ground, you’re going to be happy with the results more times than not – especially with a quality defense behind you like the Cubs have around the infield – and that’s just what Montgomery did yesterday.

I don’t know what the Cubs plan is for Montgomery going forward, but there’s not really an obvious opening in the rotation – Yu Darvish is performing poorly right now, but he’s not coming out anytime soon. So if Montgomery wants to start – which we know he does – he’ll have to wait for an opening some other way, like he has in each of the last two seasons …

… Or maybe they’ll continue to piggy-back him off certain starters if they don’t expect a long start on any given day. It’s not the most ideal set-up given his obvious talent, but if he can go 4-5 innings every 3-5 days, that’s not a terrible use of his roster spot, either. Of course, if we’ve learned anything about baseball it’s that pitchers are always getting hurt. Montgomery will get his shot at starting this season sooner or later and until then, using him in larger doses less often might be better than more traditional relief appearances.