Here's the Schedule (And My Thoughts) for All the Movies At Gallagher Way This Summer! Skip to content 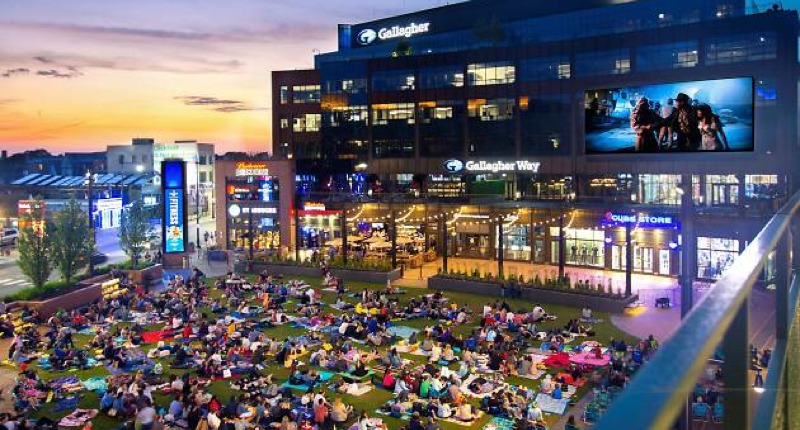 Originally identified as “The Park at Wrigley Field,” Gallagher Way is home to a giant video board and plenty of space for movie nights, and they’ve got some really good ones this summer.

Check out the schedule:

Movies in the Park! Or Gallagher Way! … Or whatever they call that thing attached to Wrigley Field! pic.twitter.com/680iMTZuAC

And here’s my unsolicited take on each movie, because why not?

Alongside The Blues Brothers, Wayne’s World is easily the best, most successful, and most memorable of the SNL spinoffs, and the only one whose sequel is actually pretty solid, too (sorry, Blues Brothers 2000 …. but no). If you haven’t seen it in a while, go to Wrigley Field tomorrow night, because I GUARANTEE it holds up.

With writer and/or director credits like National Lampoon’s  Vacation, Sixteen Candles, Pretty in Pink, Weird Science, Ferris Bueller’s Day Off, Planes, Trains & Automobiles, Uncle Buck, The Great Outdoors, Home Alone, and a hell of a lot more, it’s hard to pick a favorite John Hughes movie. But I can say with complete confidence that “The Breakfast Club” is EASILY among the top-3. Again, if you haven’t seen it in a while – or not at all – I’d make time to go catch this one.

I’ll concede that Clueless is not for everybody, but I bet you didn’t know the director also directed classics like Fast Times at Ridgemont High and National Lampoon’s European Vacation. And, hey, Paul Rudd is in it. Remember that?

I don’t care how many of you I lost with this one … Field of Dreams is ridiculously overrated and so very far away from the best baseball movie that it ranked 13th when I ranked them a couple years ago. And that’s not to mention the fact that it had only 10 minutes and 20 seconds of actual baseball played in the movie, the second lowest on my list. Everyone just gets all hyped about it because of nostalgia and because they know that one line. Get over it. Field of Dreams is not that good.

Spider-Man: Into the Spider Verse

On the surface, this looks like nothing more than an animated, made-for-children, potential cash-grab based on the superhero hype, but NOTHING could be further from the truth. Spider-Man: Into the Spider Verse was genuinely one of the best movies – for adults or children – I’ve seen in the past year, and believe me: I see everything.

10 Things I Hate About You

I just rewatched 10 Things I Hate About You with my wife a few weeks ago, and I gotta say, it was WAY better than I remember it. Although it’s largely just a solid high school comedy, the cast is pretty stacked with Heath Ledger, Julia Stiles, Joseph Gorden-Levitt, and many other familiar faces.

It’s also based on the Shakespearean classic The Taming of the Shrew, and if you pay close attention, they actually hit you with a ton of references to Shakespeare and, obviously, the play itself. But the cool part is none of it is spoon-fed to you. They treat the audience with sophistication and respect, which makes the movie stand out above other similar efforts.

Big doesn’t offer much that other body-swap, age-swap, look-swap movies don’t offer as well, but it does have Tom Hanks, which is neat. It hasn’t aged quite as nicely into the current environment – if you’ve seen the movie and remember it well, you should already know what I mean – but it’s a great piece of nostalgia. And, hey! Remember that scene where they play the piano in the toy store? That’s fun!

It’s been a while since I’ve seen High Fidelity, but I do remember liking it. And who can say no to a cast including John Cusack, Jack Black, and even Tim Robbins, Catherine Zeta-Jones, Joan Cusack, and Bruce Springsteen.

Rudy is Rudy. You should know all about it – especially for often it was reference – by me – the other day when Ben Zobrist went into Joe Maddon’s office to get David Bote more playing time:

That’s from Rudy. Have you really not seen Rudy?

And finally, the all-time classic – and one movie for which I will ABSOLUTELY be in attendance – Jurassic Park. Jurassic Park is an absolute staple of cinema and will never, ever age out of existence. It was damn-near close to a perfect movie and, in my opinion, one of Stephen Spielberg’s very best – including Jaws and Raiders of the Lost Ark.

At an absolute minimum, it is a clinic in how special and practical effects SHOULD be handled. It’s honestly amazing how well the effects hold up nearly 30 years later.

I can’t say how many movies I will attend this summer, but I’m already pencilling down a few.