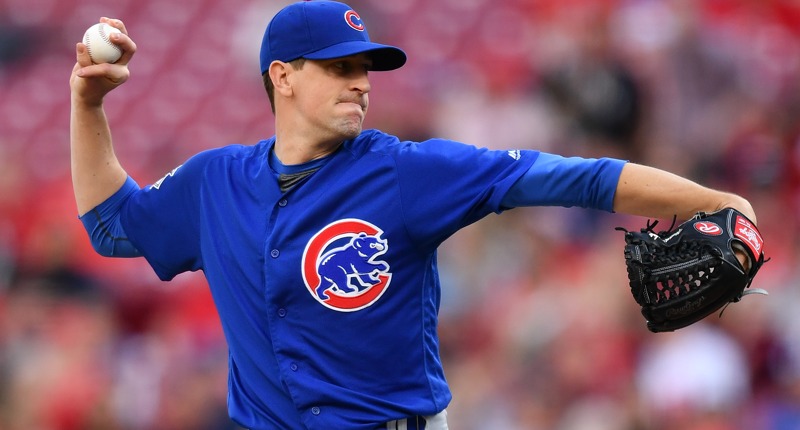 Although Kyle Hendricks failed last night – he failed to throw another Maddux, the bum – he did come mighty close to yet another complete game.

Cubs Manager Joe Maddon handed Maddux the ball in the bottom of the ninth inning and took him out only after he gave up his first walk of the night (first walk in three starts, actually, but who’s counting?). The Cubs bullpen managed to close things out from there, but with Hendricks at just 97 pitches, I think I might’ve let him finish what he started.

But how about that efficiency again, eh? Hendricks used just 97 pitches during his 8.0 innings last night, after using 96 pitches through another 8.0 innings his last time out, after using just 81 (!) pitches for his complete game shutout the time before that. That’s a combined 274 pitches to get through 25 innings, or just 10.96 pitches/inning!

Think about it this way, for added fun: Over the last three starts, Kyle Hendricks has used just 3.65 pitches on average to get an out. That’s some stress-free baseball.

And sure, 17 strikeouts in 25 innings is nothing to write home about in isolation, but when you pair it with just 12 hits and 1 walk, plus a 23.5% soft-contact rate and 29.4% hard-contact rate, you’ve got yourself a pitcher.

“Willy and I are locked in,” Hendricks said after throwing 67 of 97 pitches for strikes. “We’re on the same page. Every pitch, he knows what I want to do. And I know what he’s thinking, so it helps a lot. We’re working at a great tempo, and everything is working off my fastball.”

For what it’s worth, Hendricks’ fastball wasn’t breaking any necks last night (it never does), but Brooks Baseball clocked his sinker at 88.0 MPH with a peak of 89.5 MPH, both of which roughly matched the high points set in his last start, which as you already know, was also another gem. With the other parts of his game, that velocity will absolutely play.

But are you entirely clear on just how good Kyle Hendricks has been during this three-game stretch? Because I kind of doubt it.

I certainly didn’t realize just how good he has been comparatively against the last five years. After all, Kyle Hendricks has had a really fantastic career through today, including a top-3 Cy Young finish in 2016, some Rookie of the Year votes back in 2014, and, of course, all of those HUGE playoff performances from 2015-2018. But this last streak of three games has been particularly special.

In fact, this has been the single best three-game streak of Kyle Hendricks’ entire career!

And his previous best of 74 (matched three times previously) doesn’t even come CLOSE. Heck, when we noticed this exact accomplishment for Jose Quintana (vis a vis his own career) earlier this season, his three-game average was 76, with a total combined Game Score of 228 and THAT was impressive! But Hendricks just blew it out of the water!

Hendricks has been the best version of himself lately and it’s been absolutely magnificent to watch … not to mention stress-free. My favorite kind of baseball.