More Than Soccer Kicks: Three Brilliant Starts In a Row For Javier Assad Skip to content 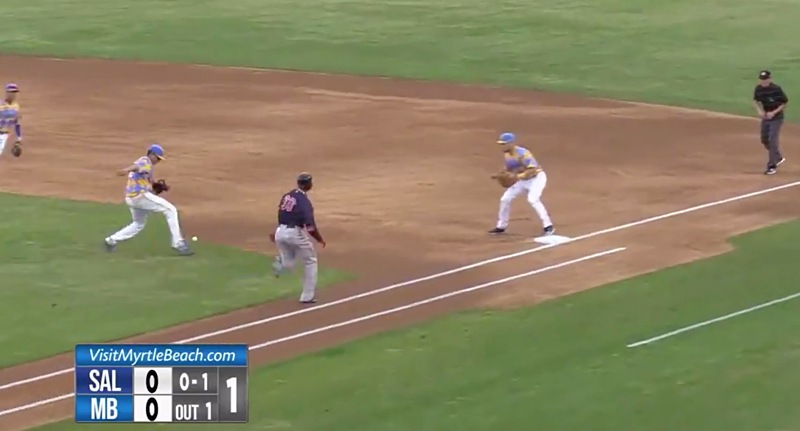 Cubs pitching prospect Javier Assad made SportsCenter on May 3rd for his kick save of a groundball, then won Carolina League Pitcher of the Week for his May 9 start, and yet it’s his work last night that topped it all.

Assad threw his third consecutive scoreless start, the best of his professional career, allowing just one hit and one walk over seven innings. Dating back to April 27, Assad now has thrown 21 and 1/3 scoreless innings in a row. His numbers overall during that stretch: 21.1 IP, 6 H, 0 R, 6 BB, 20 K.

Last night, Assad was unable to corral a groundball a few feet to his right in the second inning, resulting in an infield single (he should have kicked it!). In his last 41 batters faced, that dinky hit is the only one in that column.

Just 21 years old from Tijuana, Assad is the fifth-youngest pitcher in the Carolina League with at least twenty innings so far. Assad was signed in 2015 for $150,000 when the Cubs made their first concerted splash in Mexico, coming away with Jose Albertos, Isaac Paredes, Faustino Carrera, Kevin Zamudio and Assad.

Assad is your classic 4-pitch innings-eater: fastball, curveball, slider, change. His 88-92 mph fastball will show late life up in the zone, and the Cubs have had him pitch high more often as a result. Assad’s allowing fly balls at a 44% clip this season, the highest of his career. That is a good strategy in that league, and in particular, his home ballpark, where the ball does not fly well. He’s allowed just one home run this season, and in his career just 10 in 247 innings.

Assad’s secondaries are not particularly plus pitches, but he doesn’t shy away from them. He primarily uses his slider away to right-handed hitters, and his change-up is mostly away to left-handed hitters. The curveball works well as a freeze pitch, and he twice struck out left-handed hitters with the big looping curve last night. His nine strikeouts in total tied a career-high.

There is not a ton of projection left in Assad. He’s a big, doughy kid who won’t blow you away with velocity or “stuff,” but works quickly with a nice, clean delivery. While there’s work to do in cleaning up the off-speed stuff, Assad’s ceiling is unlikely to change from “back-end starter”. Still, there’s value in someone who takes the ball every five days with advanced feel and command. In four seasons, his walk rate has never been outside the 6.6-7.8% zone.

His approach against right-handers is pretty consistent: get ahead with a fastball, get strike two with one of the hooks, and then high heat with two strikes. The most impressive thing about Assad is his execution for a 21-year-old, and he’s never looked better in that department than in these last three outings.

Longer-term, we’ll see if his style plays at the higher levels, where having a superior command of your arsenal is not necessarily enough to succeed. It’s nice to have him on the radar, though.