No Walks, Tons of Strikeouts, and Almost No Hard Contact … It Was a Good Night for Yu Darvish Skip to content 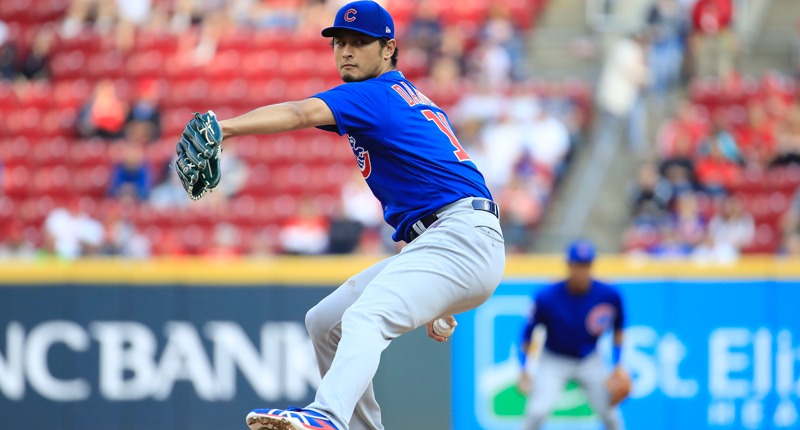 He did it! Sorta! Kinda!

Yesterday, Yu Darvish made his ninth start of the season – one more than he made all of last year – and while it wasn’t technically his best start as a Chicago Cub by game score (he beat last night’s 66 GS three times last season), it may have been the most encouraging one yet: 5.1 IP, 5H, 2ER, 0BB, 11Ks.

Before we jump in, reacquaint yourself with his performance:

I’m not going to hide the ball, here: the reason this start was so exciting to me is the big fat goose egg in the walk column. Before last night’s effort, Darvish had walked an obscene 33 batters in 36.2 IP. Do the math and find a 19.3% walk rate, up there in the 2018 Tyler Chatwood stratosphere. But not last night.

Last night, Darvish didn’t walk a single batter. And it wasn’t just luck. Sure, the Reds aren’t one of the league’s most patient teams, but Darvish was in the zone 47.1% of the time last night, compared to a season-long average of 40.8%! League average for starting pitchers this season is roughly 43%. So, you know … good stuff!

Under normal circumstances, I might’ve pointed to the Reds un-intimidating offense as a reason Darvish was willing and/or able to hang out in the zone so much, but that does’t really apply here. Before last night, Darvish couldn’t find the strike zone … at all, regardless of who was at the plate – I’m pretty sure we’ve even seen him walk more than one starting pitcher this year, so yeah. Things were getting rough.

But with a no walk outing like that under his belt, you might hold out hope that those mental hurdles can be cleared and he could get back to doing everything else he does so well …

Moving away from the command, Darvish struck out nearly half (11) of the batters he faced (21) last night. That’s the first double-digit strikeout game of his Cubs career, and it raised his season-long strikeout rate to an unexpectedly strong 28.7%. Even in this environment, that’s really, really great (last season, it would’ve ranked inside the top-10 by the end of the year).

And interestingly, he didn’t do it on whiffs, alone. With just 11 swings and misses last night, Darvish’s 10.8% swinging strike rate was just his sixth best of the season. Instead, that means a trying-to-be-patient-against-a-wild-pitcher Reds offense was both being too patient and still getting fooled more often than not, getting rung up on called strikes in the zone:

As for an explanation for the improved command and overall better performance, well look no further than the change in pitch-mix (even before last night, there’s a lesson to be learned):

Yu Darvish's game by game usage sure looks like a pitcher trying different things to see what will finally click. A couple starts ago, it was heavy sinker use. Tonight, it's going with the cutter as his No. 1 pitch. pic.twitter.com/EAFjFKqeFh

As Jordan Bastian points out, before last night’s start, Darvish’s pitch mix was all over the place. But perhaps he finally settled on something that’ll work.

After the game, Joe Maddon mentioned that Darvish might actually command his cutter and slider better, and Darvish agreed: “I think my ability is not a fastball and sinker. My ability is slider and cutter. And lo and behold, he used his cutter 35.3% of the time last night, compared to 18.1% for the season. Meanwhile, his fastball usage dropped from 46.3% for the season to 33.3% last night.

Darvish has an unusually deep arsenal of pitches, and while you’d hope he’d take fewer than 9 starts to find the right balance as a veteran who’s been around for so long, that simply might not have happened.

BUT the combination of getting over that mental hurdle of staying in the strike zone *and* finding the right mix of pitches to do so most easily is keeping me on the line. We’ve played these games with Darvish before, but something about the performance, underlying results, and post-game comments make this feel a little different (I’m a Cubs fan … unwavering hope is kinda our thing).

And, hey, it’s just in the knick of time. Yu’s next start comes at Wrigley Field … and against the one and only Jake Arrieta. Good luck. We’ll all be watching.