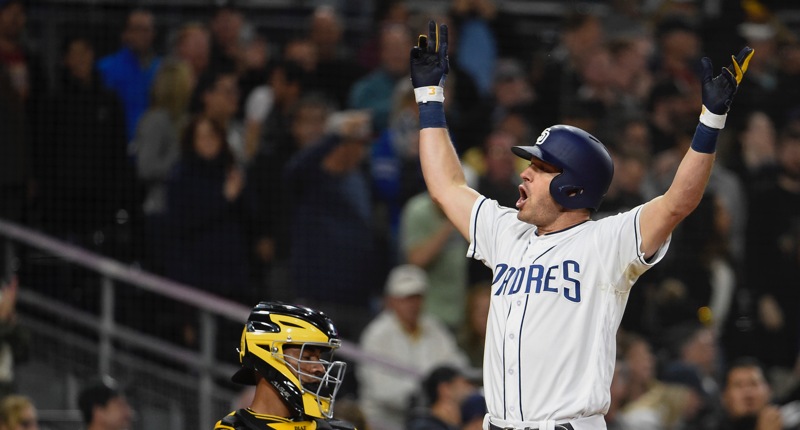 Ian Kinsler, whose performance has fallen off a bit the last couple years, was last in the national spotlight in early 2017 for comments he made about how he saw the performance of Team USA in the World Baseball Classic, as opposed to that of Team Puerto Rico or Team Dominican Republic.

“I hope kids watching the W.B.C. can watch the way we play the game and appreciate the way we play the game as opposed to the way Puerto Rico plays or the Dominican plays,” Kinsler then told The New York Times. “That’s not taking anything away from them. That just wasn’t the way we were raised. They were raised differently and to show emotion and passion when you play. We do show emotion; we do show passion. But we just do it in a different way.”

I found his comments doubly annoying, not only because of what could be interpreted as some gross ethnocentrism, but mostly because I hated the idea that he was speaking for all U.S. players. There is, what, a right way for U.S. players to celebrate big moments? To enjoy the game? You don’t speak for all American players, dude.

Fast-forward to last night, when Kinsler hit an important home run in last night’s May 16th game against the Pirates, he certainly showed his emotion in a “different way.”

Ian Kinsler’s bat flip on his homer was extraordinary… SO. MANY. FLIPS. pic.twitter.com/SyGWmRM11a

Ian Kinsler told his own fanbase tonight to “go f*** themselves” after homering. pic.twitter.com/yMKRDrmM2C

After the game, Kinsler tried to explain away what the cameras caught as an inside joke to pump up his teammates … which would have been more convincing if not for what it appeared he was saying to himself about the fans in the dugout:

I’d be less annoyed by anything Kinsler did there if it weren’t for the obvious hypocrisy in his previous comments, and him putting his own fans on blast. A choice bat flip of a big home run? Love it. Exploding with your teammates when you arrive at the plate? Love it. The rest, though? Woof.

I am reminded of the outrage around the game at Tim Anderson, who very aggressively chucked his bat a few weeks ago after a homer against the Royals, got plunked for it, and then got suspended for the ensuing fracas. I didn’t think Anderson’s bat chuck made a lot of sense in that moment, but I also sort of didn’t care. Throwing at him wasn’t the right response. Striking him out and then doing a dance on the mound – that’s the response I wanted to see.

As for Kinsler, again, I don’t really care about the bat flip or the big celebration at the plate. That stuff is *GOOD*. But if Anderson had done what he did while also dropping f-bombs that very much looked directed at the fans? He would have been DESTROYED in the national conversation, and likely suspended for a very long time. Whether that’s a new school or old school dynamic, or whether race factors into it, I don’t think there’s a definitive answer. (Personally, the new/old/fun-hating absurdity is what comes to mind first, but I’m definitely not going to criticize anyone who sees a racial element in a sport that has been struggling with that issue for a while now, especially as it relates to the “fun” side of things.)

Either way, I do think it’s important to point it out now, and then we just have to see how MLB and the media respond to what Kinsler did.

What do you think? What Kinsler did is much worse, right? I don’t want to get lost in his previous comments and make that the primary reason his actions last night chap me so much (because I think the f-bombs appearing directed at the fans were bad enough on their own), but it’s really hard for me not to pair those things together, and then also to think about the way people talked about Anderson’s situation.