I Don't Know About You, But I Think I'm Feeling Great About Yu Darvish's Latest Start Skip to content 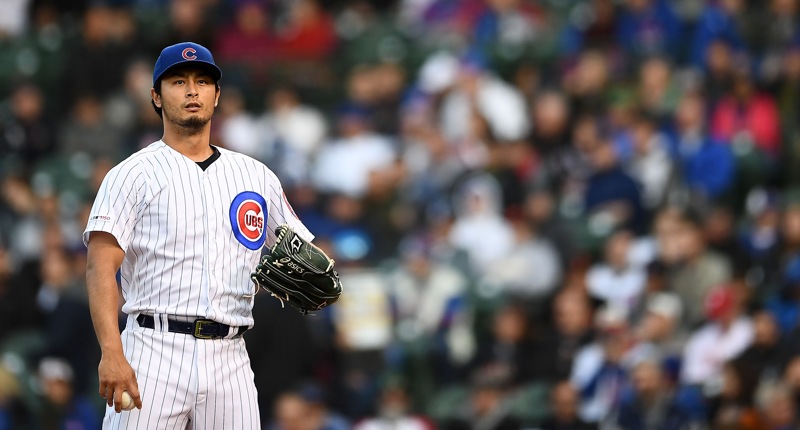 I feel so conflicted about Yu Darvish’s start against Jake Arrieta and the Phillies last night, but that’s only because I moved the goal posts after things got started.

Heading into the game, I was just hoping Darvish would avoid disaster. We all know how turbulent the start of his Cubs career has been, and how the mental part of his game has been a big part of that problem. And yet here he was, squaring up at home against arguably the most popular and successful Cubs pitcher in the last decade or more – I mean, did you see that standing ovation Arrieta got in his first at-bat? I was nervous. It just felt like something that could go south fast, leaving Cubs fans cheering on Jake while booing Yu, which would’ve been a nightmare.

But nothing could be further from what actually happened.

Darvish started the game off with a killer strikeout of Andrew McCutchen, and allowed just one single his first time through the order. He also struck out Jake Arrieta after his standing-O, which felt like a big moment after the count was pushed full, and then he wrapped up the fifth inning at just 67 pitches.

And that’s when I (foolishly) moved the goal posts.

Through 5.0 innings, Darvish looked absolutely dominant. All he had allowed through that point was two singles and a walk, while otherwise striking out seven Phillies. And, again, at just 67 pitches, I started getting greedy and looking ahead at how this could finally be that 7-8-9 inning start we’ve been waiting for. And then the stupid 6th inning happened.

I probably would’ve taken that line before the night began – I mean, dude, it’s a quality start – but I started wanting so much more, and the only reason we didn’t get it was some unfavorable matchups and some frustrating nonsense.

Let’s start with the walks.

Given that command has been such an issue for Darvish this season, I was thrilled to see him walk nobody in his last start, and get through 5.0 innings with just one walk last night. But three walks through six innings doesn’t look nearly as good, right? Well, I mean, sure. But there’s a very important caveat: Andrew McCutchen (17.3%) and Bryce Harper (16.9% overall, 18.5% against righties) have the two highest walk rates in the entire National League. Darvish may have been starting to lose the strike zone, but those guys take walks. Period.

And as for the runs, well that’s when I start to get really annoyed.

Before he gave up even one run, Darvish had taken J.T. Realmuto to two strikes with two outs in the inning, when he hit his run-scoring ground ball up the middle on a really tough pitch below the zone: 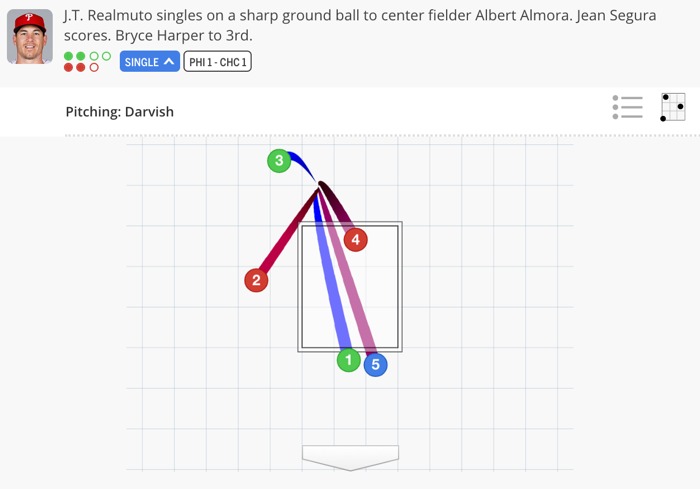 With a little more luck (or a little better defensive positioning), that inning would be over and Darvish likely would’ve gone another inning or two. Sometimes baseball is just gonna baseball, so whatever I get it – but it’s not like he made a huge mistake. It just stinks.

After Realmuto stole second base, Cesar Herndez took another perfectly located pitch at the very bottom of the zone out to right for the lamest 2-RBI triple: 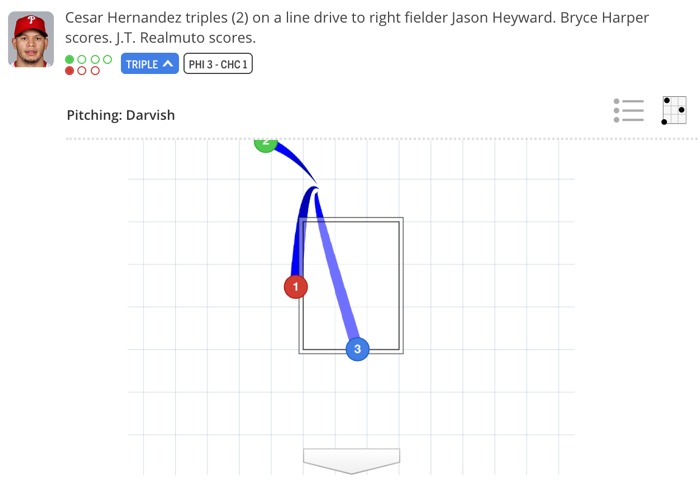 I call the triple lame, because for one … IT WAS JUST A 79-MPH LOOPING BALL OFF THE BAT. That was just the 38th(!) hardest hit ball of the night. Like, come on. That’s how you get a 2-run triple on that crap? Give me a break.

But perhaps more importantly, Jason Heyward probably could have handled that one better. For one, off the bat, it looked like something he – of all people – should have been able to catch. But even after it dropped in front of him, it then bounced off the right field foul wall and over his head, allowing Hernandez to get all the way around to third. That didn’t ultimately matter, as Darvish got Odubel Herrera to ground out on the very next play, but the damage was done.

At that point, Darvish pushed his pitch count to 96 on the night, and, as he was due up third in the bottom half of the inning, was done. So you see, what was shaping up to be the longest, best outing of his Cubs career was unexpectedly and frustratingly cut short.

But now, with a clear head and a night’s sleep, I can say Darvish did a really great job last night overall. On top of keeping his team in the game with a quality start, he struck out seven batters and had his command mostly under control. He also netted an impressive 16 whiffs (10 on his cutter) and finished with an impressive 53.3% ground ball rate. There was some hard contact mixed in there, but there was plenty of soft contact, too. And if it wasn’t for walks to two of the game’s walking-most hitters, a seeing-eye grounder, and a 79 MPH exit velocity triple, all happening back-to-back, I think he would’ve kept cruising on his way to an excellent evening.

Maybe most important of all, he didn’t shrink from a big, pressure-filled, story-line-packed game.

I know we’ve found ourselves playing the what-if game with him before, but this feels so much different. And after his 11K-0BB performance the last time out, I’m finally excited – not nervous – to see what Darvish does next.

Something? Nothing? After his first three starts of the year, Darvish has now gone seven starts as a perfectly average starting pitcher, with a 4.25 ERA and 4.25 FIP.

We want so much more, but I'll start at average.