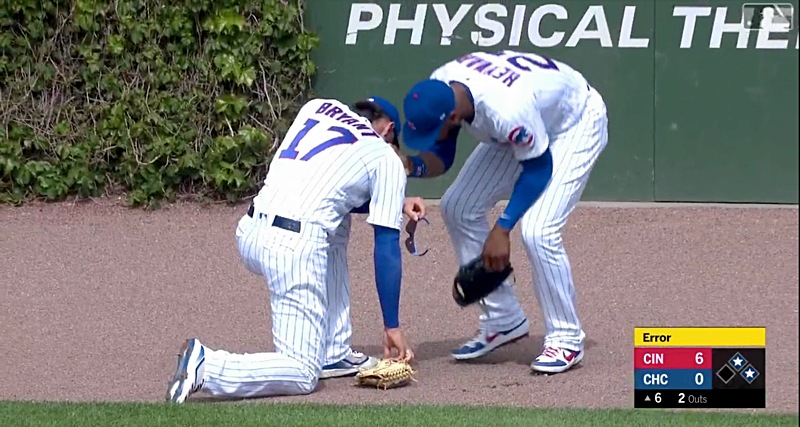 As if today’s ongoing drubbing at the hands of the Reds wasn’t bad enough, Kris Bryant left the game after an outfield collision with Jason Heyward.

After time with the trainer and Joe Maddon, Bryant gingerly left the field. We’ll update when there’s more on the injury.

UPDATE: I can’t tell if this is a terrifying update, or no update at all:

Joe Maddon on Kris Bryant: "He's doing OK. He's still under evaluation. We don't know exactly what we're doing with this whole thing yet. But we're trying to talk with the docs and him to find out exactly where we're at."

“We don’t know exactly what we’re doing with this whole thing yet.”

UPDATE 2: Thanks for the words, Mooney. They do not comfort me at all:

Kris Bryant was not available to the media during this evaluation period. Jason Heyward gave a few versions of “You got to ask KB” when asked about their outfield collision.

“I hope he feels great, but time will tell,” Heyward said. “We both went hard to make a play."

UPDATE 3: OK, so this one is a sliver of positivity:

Update: Kris Bryant was cleared to fly with the Cubs to Houston.

That doesn’t necessarily mean he’s “fine,” but it does mean the initial evaluation suggested there was a decent chance he could play this week.