Wild Sunday On The Farm: Every Game Tied Late, So Many Runs, an Injury, a Walk-Off, More Skip to content 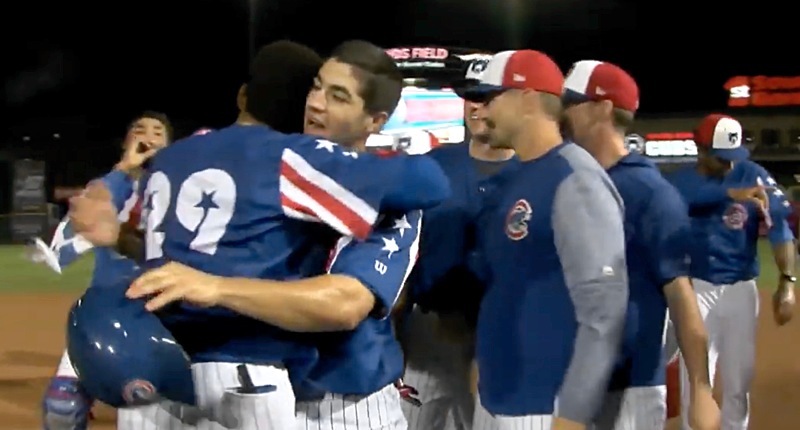 We might not be doing Minor League Daily’s regularly anymore, but some days are entertaining enough on the farm to demand something similar. Yesterday was such a day: all four affiliates had games tied in the ninth inning, most with football-like scores.

With a tip of the cap to Mister Luke, here’s how it went down.

In lieu of a list, on this day the affiliates averaged 10 runs scored, here’s every guy who had 3+ hits.

Twice Iowa blew leads in this one, but the baseball gods didn’t penalize them for it. After Jacob Hannemann singled home to the go-ahead run in the top of the ninth, Jim Adducci broke the game wide open with a 3-run double.

The Smokies grabbed a huge 10-4 lead with a five run sixth inning, but found a way to lose by allowing four in the seventh, two in the eighth, one in the ninth. Madam Regression came calling for Ian Clarkin, who entered the game with a 1.50 ERA and 5.10 xFIP, but was charged for three runs for a single out in this one.

Paul Richan ran into some problems the third time through the order, but was bailed out by a nice eighth inning rally by the middle of the Pelicans lineup. Alas, a three base error in the ninth on pitcher Manuel Rodriguez in the bottom of the ninth opened the door for Wilmington’s walk-off sacrifice fly.

Saved the craziest for last. After Ethan Roberts blew his first save of the season, this one went to extras, with the silly man-on-second rules. The Whitecaps scored three in the top of the tenth, and this one looked out of reach. With one out, Brennen Davis singled home a run to bring the deficit to two, but then Rafelin Lorenzo flew out. The Cubs elected to have Gustavo Polanco, new to the team, pinch hit for Rafael Narea. On a 1-2 count, down to the last strike, Polanco saved the game with a home run to left field. The Whitecaps scored one in the top of the eleven, but that didn’t prove enough. Jonathan Sierra hit a bloop single to center to tie the game, and with the bases load, Christopher Morel pulled the first pitch he saw down the left field line for a game winner.

The other news in this one was Cole Roederer was injured sliding into second in the fifth inning, leaving the game. Roederer walked off on his own power, and while it didn’t look serious on tape, not the news South Bend needed after losing Nelson Velazquez earlier in the weekend.

Highly recommend the highlights on this one: