Albert Almora Spoke After the Game About the Terrible Foul Ball, Hopes for the Fan and Family Skip to content 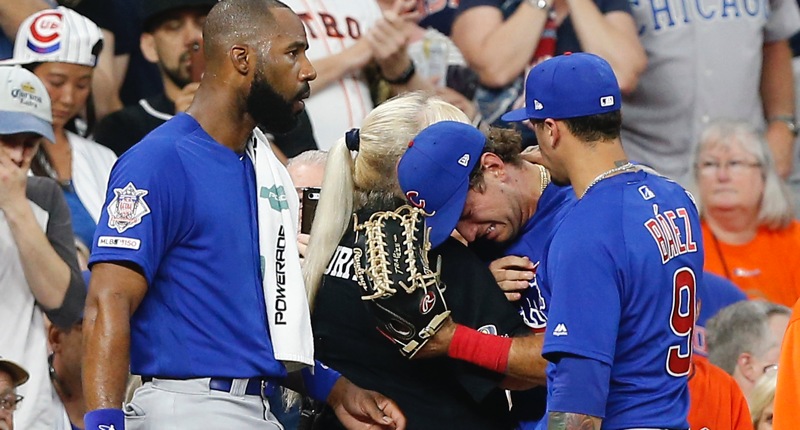 It’s very challenging to transition to “normal” baseball coverage today without knowing how the young fan who was struck by a foul ball last night is doing. We know only that she was taken to the hospital after the game, and everyone who observed the moment was shaken by it. We are not entitled to know more than that, even as we just desperately want the best for that little girl and her family, and we may not end up knowing more.

After the game, Albert Almora Jr., who merely happened to be the batter when the foul ball happened – something that could happen to any player at any time so long as there is not netting to the foul pole – was still deeply impacted.

"I'm speechless, at a loss for words. Being a father of two boys." Albert Almora speaks after scary foul ball incident: https://t.co/wIl0a3TxAr pic.twitter.com/ONxuzw85jA

Cubs CF Albert Almora Jr: "All my teammates..everybody came out & tried to talk to me..Credit to (Wade) Miley. He came to me & tried to calm me down..God willing, I'll be able to have a relationship with that little girl for the rest of my life" video courtesy @richardjustice pic.twitter.com/O95tjxon3A

“Albert is an emotional young man, with children, so that made it even more real to him. And I got it. I understood exactly what he was going through right there. And I knew he needed somebody to walk up there."

"After he came off the field and was consoled by [the] security guard, he went upstairs and was able to compose himself up here [in the clubhouse] and then he came back, and he said thumbs up, I want to play. Because I was prepared to take him out."

Joe said he was going to take Almora out of the game but Albert said he composed himself after that hug with the guard. Sounds like he got positive news at that point: "Just unofficial things," he said.

The broader conversation that will and should emanate from this terrible incident is how much netting is enough to protect fans as the game gets faster and faster, and the balls are hit harder and harder.

‘I want to put a net around the whole stadium’: Could scary moment in Cubs-Astros game lead to needed change? https://t.co/vps9oJE8XZ

Following the awful incident with a child getting hit by a ball in the Cubs-Astros game, Kris Bryant was unequivocal, telling ESPN that Major League Baseball needs to extend netting further down the lines to prevent hard-hit balls rocketing into the stands and injuring fans.