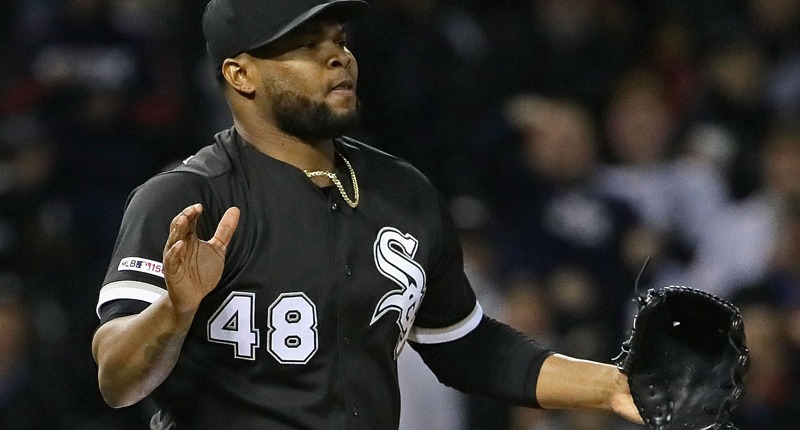 Although the White Sox certainly had bigger plans for this season than their 27-29 record (and 10.5 game first-place deficit) will ultimately allow them to enjoy, every good front office knows that you have to be flexible and roll with the punches. So if and when teams come calling for trades around the mid-season mark, some tough decisions will have to be made with the future/rebuild in mind.

To that end, their closer, Alex Colome, has been reportedly been garnering a lot of trade interest around the league, including from your own Chicago Cubs.

Via Bruce Levine (670 The Score): “As the White Sox hosted the Royals for a three-games series earlier this week, the Cubs, Phillies, Nationals, Mets, Diamondbacks and Yankees had scouts in attendance watching [Colome].”

The White Sox, you’ll recall, acquired Colome from the Mariners last November for catcher Omar Narvaez, who’s had himself quite a season so far. But Colome has been excellent, too. In 22.2 innings this season, Colome already has 11 saves and a 1.59 ERA (3.10 FIP). His 26.6% strikeout rate isn’t elite among relievers, but it’s very strong and looks great next to a 6.3% walk rate. One thing that might scare you off a bit is the extremely low volume of ground balls (35.8% this season) and relatively high amount of hard contact, but he’s been much better in both respects in the recent past.

As for his contract, Colome, 30, is under control (via arbitration) for one more year after this one. He’s making $7.3M this season and will likely get a nice raise in his final trip next year. I know the Cubs have said they don’t have a lot of money in the budget this year, but a prorated version of $7.3M should be doable and anything he earns next year is on next year’s budget (which should have considerably more space).

And to that end, sure, he makes sense for this Cubs team (in fact, I believe the Cubs front office had interest in Colome back during his time with the Rays). He isn’t your *ideal* closer, but he doesn’t walk guys, he’s tough on both righties and lefties, and he throws in the mid-90s. Moreover, with more than just a half-season of control, he could help out the bullpen both this and next season, when the Cubs still figure to be in contention, but don’t have many obvious back-end relief types.

The rub is the relatively large amount of interest in Colome already and the fact that the Cubs and White Sox don’t usually love dealing together, even if they did so in the recent past (Jose Quintana for Eloy Jimenez/Dylan Cease). All of that could conspire to drive up the price on a Cubs organization that is only finally rebuilding their cache of prospects.

In any case, Levine doesn’t expect the trade talks to heat up until at least after next week’s draft, when free agent reliever Craig Kimbrel might finally come off the board and fills at least one buyers’ needs.

UPDATE: I’ll say more clearly that I do believe there are other, better options out there and Colome does come with some regression-based risk, but he has outperformed his peripherals A LOT in the past, and I love the additional year of control. He wouldn’t be my first choice, but he can almost certainly help out this Cubs bullpen right now.