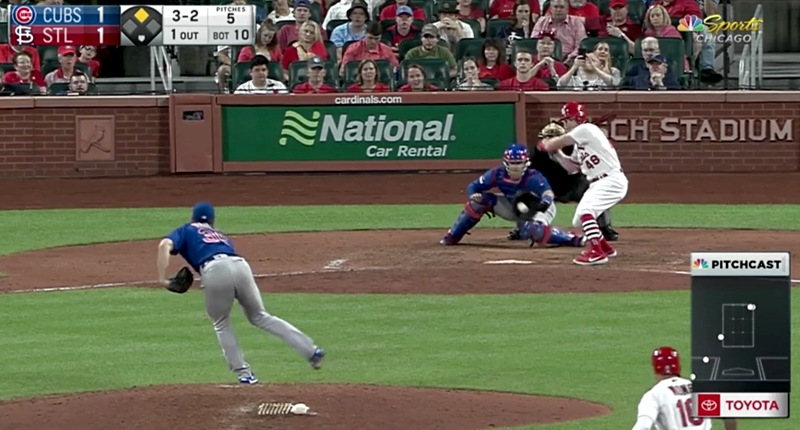 Even if home plate umpire Laz Diaz correctly calls Dillon Maples’ nasty slider last night, ringing up Harrison Bader instead of sending him to first base, there is no guarantee that the Cubs subsequently get out of that 10th inning unscathed.

Moreover, even if the Cubs do get out of that 10th inning, there’s no guarantee they go on to win the game. In fact, the odds were probably slightly against them, on the road with a diminished bullpen and bats that hadn’t shown much in the way of signs of life.

That is all to say, although I do want to discuss last night’s strike zone, I think we all need to be clear that what was taken from the Cubs was not necessarily a win – but a full and fair opportunity to try to win.

Once we’re on that same page, let’s be very clear: the Cubs got screwed. If we focus on one particular pitch, Dillon Maples got screwed quite badly:

As Cubs broadcaster Jim Deshaies said, “Wow. That might be the worst miss of the year.”

The missed called was particularly galling because it took a situation where Maples executed his pitch SO WELL that it badly fooled Bader, and not only did Maples not get rewarded for succeeding, he got PUNISHED for it.

After the game, Joe Maddon was appropriately ticked off, as you can see from his comments here at NBC.

“Even Dillon Maples was outstanding, too,” Maddon said. “The fact that he was placed in that situation after he clearly struck Bader out, which would’ve totally turned into a different moment for him. I totally believe that. That’s the kind of thing that bums me out. Of course, listen, we were not good offensively, granted. But to have pitches like that taken away in a crucial moment, now my guy’s gotta go home and feel bad about himself tonight, which I don’t like whatsoever. And it wasn’t even a borderline pitch. It was a strike. That’s the kinda stuff you wanna see something done about. And I’m still not advocating electronic strike zone. I’m just advocating let’s go. Let’s go.”

“You cannot miss that pitch in that situation. Here’s a guy that’s ascending to the major leagues as a relief pitcher, doing a wonderful job, does his job and does not get rewarded for it. That’s what kind of pisses me off, quite frankly.”

The zone for the night, whether by virtue of the Cubs’ pitchers’ “nastiness” or Cubs’ catcher’s framing, was absolutely garbage for the Cubs. The called balls and strikes for each team, via Statcast, were terrible in any case, but they also show a stark difference between the teams:

Here are the ball and called strike calls for both Cubs and Cardinals pitchers tonight. The ball-four call on Maples loomed large given inning/situation, but there were missed calls on both sides. pic.twitter.com/169W7dE9ss

Ready to get more pissed off? One of those obvious strikes at the bottom of the zone that was called a ball? It was the first inning ball four to Matt Carpenter to open the game. As with Maples in the 10th, instead of strike three, it was a walk that ultimately yielded the Cardinals’ only run in the first nine innings.

Ready for more joy this morning? That walk that opened the game last night? The one that yielded the Cardinals' only run in the first 9 innings? Per Statcast, despite the on-screen zone, this one also was actually clearly in the zone. Should have been strike three. pic.twitter.com/Yhg49MyGG8

I’m not as chapped about that one as the Maples call, but still. We tend to just let this stuff fly by in the moment, but that burned the Cubs.

As the technology improves to the point where it can at least clarify clear misses like that Maples walk, I think it’s time to address this. Maybe it’s not full-on robo umps, but a quick challenge system like tennis? Maybe teams get a certain limited number of challenges of a ball/strike call per game? It shouldn’t add too much of a delay if implemented properly – for example, the challenge has to be requested by the catcher immediately on receiving the pitch, and then the result is radioed in to the home plate umpire almost immediately.

Like I said at the top, and I mean it: we can’t say a system like that would have changed the win/loss result of last night’s game. But we can say it would have prevented Dillon Maples from getting punished for throwing such a dang good pitch.