Jon Lester Bounced Back Big-Time, And We Should Always See It Coming Skip to content 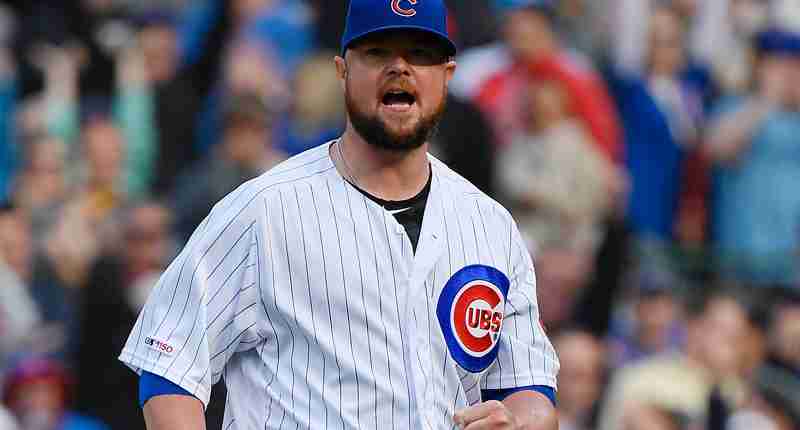 Twice already this season – first Jose Quintana and then Kyle Hendricks – a Cubs starting pitcher has strung together what was effectively the best three-game stretch of his entire career. And that got me thinking about Jon Lester’s last three starts before yesterday, which felt like anything but.

As it turns out, the three starts before Lesters’ big win over the Angels yesterday had an average Game Score of 24, which was tied for the 5th worst three-game stretch of his relatively long career:

So, yeah, it was about as bad as it gets for Lester before yesterday. But when I went to look these numbers up, I noticed another really interesting trend: Whenever Lester has had a stretch like this, he almost always bounced back in a really big way almost immediately after.

As you may well know, a Game Score over 70 is extremely good (before last night, Lester had just one this entire season and only seven total since the beginning of LAST year). So to see him going from his worst to nearly his best time and time again is pretty awesome.

By Game Score, that effort earned Big Jon a 74, which makes it his second best start of the season by that measure – right after one of the worst three-game starts of his entire career. How weird is that?

I guess we need to point out that without Carlos Gonzalez making an EXCELLENT catch on the warning track with the bases loaded in Lester’s last inning of work, his overall numbers wouldn’t have looked as good, but, hey, sometime’s baseball’s gonna treat you right. And Lester still stood up there and struck out Taylor Ward with a full count, the bases loaded, and two outs to end his evening, so I’d say he earned it.

But that’s just Jon Lester for you. The guy has guts, and is the ONLY player in baseball I’m comfortable going all “homer” over. He just always gets it done when the moment calls for it.

As for what, specifically, was working for Lester yesterday, it’s hard to say. He did get six strikeouts, but he only netted six whiffs, which actually amounts to his lowest swinging strike rate of the season. And although he walked only one batter, he was actually in the strike zone less often than he usually is. Along the same lines, Lester allowed more line drives than usual and got way fewer ground balls. So it seems the only explanation for the dominant outing, as far as I can tell, is the really great 23.5% hard-hit rate.

That’s the second lowest hard-hit rate Lester has average in a single game this season and is obviously FAR lower than the 2019 starting pitcher average (38.1%). It would be nice if he didn’t allow so many fly balls, but if you’re going to, a very small hard-hit rate like that certainly helps.

So once again, we’re left with this imperfect understanding of a great Jon Lester performance … which happens to be why he’s my favorite starter to watch and attempt to analyze right now. For whatever reason, Lester is simply capable of getting good results despite an assortment of different peripherals looking sub-optimal in any given game. But I love that. It reminds me how much more there is to learn about this extremely weird and awesome sport. There’s just so much uncharted territory out there, and Lester is like a treasure map of understanding what makes a great starter.